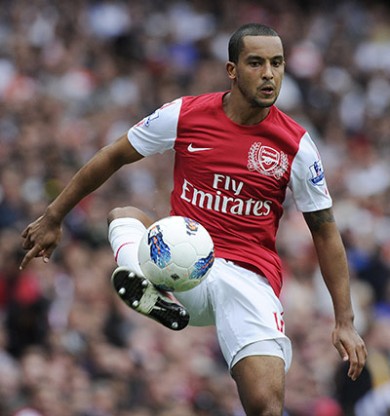 What is going on with Walcott at the moment?

Let me first of all say, I am a big fan of Theo. I don’t think he is the best winger we have ever had, but he certainly is a great player to have in our team. His stats over the last two seasons are impressive, both in terms of goals scored (24 in 84 games) and assists (22 in 84 games). Just have a look around and you will not find many wingers who do significantly better than him – especially if you compare him with other 23 year old wingers. Compare his stats with the former legends of Pires and Ljungberg and you will see he really has not been doing badly over the last two seasons.

Sometimes Theo is great and sometimes he is disappointing. Even top-top classic wingers like Robben and Ribery have off-games now and again, as the wings are difficult areas to constantly make a difference, and the opposition often chooses to eliminate the danger by doubling up. Every player needs confidence and full fitness to perform well, but if a winger is lacking in these areas it will show more than in any other on-field position.

Taking all the above into account, I would be really happy if Theo would sign a new contract and spend his best football years at our beloved Arsenal. His game will definitely develop further and he could easily become a core player in our team again. But, it does not look like Theo will be signing a new contract for us.

When it was not done before the closure of the transfer window, I was not worried about it at all. Both parties seemed to be saying they wanted a new agreement and it would all be sorted out soon. Three weeks later and Theo has hardly featured for Arsenal and it looks like Arsene has just about lost his patience with him. The signs are, unfortunately, strongly pointing towards an exit in January.

I reckon part of the problem is that Walcott compares his salary with those of similar players at Chelsea and the Manchester Clubs, and thinks he should be offered a better package. I cannot blame him for that, but neither can I blame Arsenal for drawing a line in the sand at the rumoured £75k per week, and for sticking to their pay-structure. I also don’t think he is worth more than that.

I have been thinking for a while who could be a good replacement for Theo and although I was able to muster a few names – Victor Moses, Adam Johnson, Afellay came to mind – none of them made me feel excited. But then, unexpectedly, whilst watching our CL game this week, I really became interested in Montpellier’s nr20: the 22 year old Remy Cabella. I have watched the second half against Montpellier again this week – just concentrating on him, and what an all round impressive performance he had on Tuesday.

Cabella was a thorn in our side throughout the game. He was simply everywhere as he was not man-marked and clearly given a free role to wreak havoc. He has got a good first touch, great vision, excellent movement, technically very strong, and a fine passer of the ball. His audacious, bergkampesque chip over Mannone in the second half was a joy to watch; not just in terms of execution, but also for both seeing it and daring it. He also made a good run across our box, followed by a clean, low strike that just went wide in the first half.

Cabella has the potential to become the sort of footballer for whom people come to watch a game.

Cabella is 171 cm long, so quite small. You could say that he has a good height to become an Arsenal midfielder these days! He holds on to the ball really well, likes to track back and is not afraid to make a tackle. He has also got a great engine and is quite fast. His finishing still needs to improve a bit, as he lacked composure against us once or twice in front of goal, on Tuesday. Although, with three goals in five games this season, he might be starting to get this right as well.

He is not a typical, classical winger, but just like Gervinho and the Ox, he looks comfortable on the wings. He can take on a player and get past them by using his skills and tricks rather than relying on pure speed.

Anyway, it is a bit early still to say Cabella would make a good replacement for Theo, if he is indeed to leave. But let’s keep an eye on him and hopefully he will play again when Montpellier visits us at the Home of Football. Definitely a player worth watching over the next few months, and I would not be surprised at all if Wenger has already got plans in place to buy him.

35 thoughts on “Impressive Remy Cabella a good replacement for Walcott?”