Forget about tactics, transfers and deadwood: THIS is what really matters!

It is great to blog about everything Arsenal and watch games on telly; to discuss tactics, formations, who’s the deadwood and who we should sign during the next transfer window.

But nothing compares to live football. Nothing beats, seeing the boys in the – red and white covered – flesh, being able to smell the pitch, sensing the tension and the hope, singing along with fellow Gooners, being able to see the entire pitch and watching the tactics of both teams unfold, as well as celebrating our victories together.

I am lucky enough to watch a few games every season, but I know there are thousands, if not ten thousands of fellow Gooners out there, who support their team passionately but in relative, or sometimes total, isolation – whether based in the UK or anywhere else in the world – and have never seen our team play live.

BK was approached by Switzerland based Pope the Gooner with a request to publish his personal experiences of his first-ever live Arsenal game, and of course I snapped his hand off! 🙂

Enjoy the read, and please tell us your first/special Arsenal game experience!

First Arsenal Live Game: a few lines on pre-match expectations, the game itself, and final thoughts. 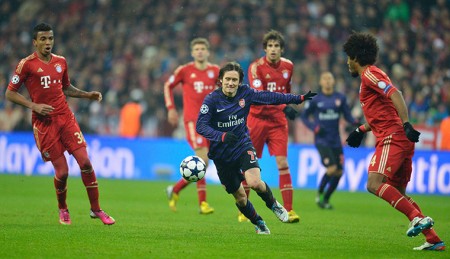 Thanking the Guardian for being able to copy their pictures of the Bayern – Arsenal CL match.

After the outcome of the CL draw ‘Arsenal vs Bayern Munich’ had been communicated, I was really excited. There was a real chance that I would be able to take one or two days off and go to Munich to see the Gunners live for the first time.

I immediately asked a friend of mine studying with me in Zurich, but originally from Munich, if he was interested in seeing the game with me. After a positive answer, I called our local ticket agent to get the tickets. However, they told me that nothing was known yet, not even if they would be able to get some of those little pieces of paper. ‘I should check the homepage for updates’, they told me: and so I did; every thirty seconds or so. And then one day, it was around Christmas, suddenly the tickets appeared in the web shop; we would be seated in a Bayern section of the Allianz Arena, but finally I’d be seeing my Arsenal!

Well, as can be deduced from the title, my expectations did in fact change a little after watching the home game. However before that day, I was full of expectation. Get a result, maybe even only a scoreless draw, at home and a one clinical counter attack at their place might prove decisive. Given the current form around that time – that time being the 2012/2013 season – I admit that was kind of overly optimistic, but as long as we’re not out, we’re still in!

Then the transfer window came and went. The addition of Nacho seemed very decent, especially after his performance against Stoke after just one training session with the club. But there was this tag Nacho was carrying: ‘cup-tied’, and he would sadly not be able to help us out against Bayern. Gibb’s injury concerned me a little, and the information the club was leaking just gave me enough HOPE that he would be back in time for the Bayern games.

Then, finally it was time and the first leg was played. I was meeting with my friend from Munich and we watched it together with some other lads. Most of them were for Munich, one or two undecided, and then there I was with my Arsenal shirt. We started quite well with some quick and decisive forward play and the Bayern guys were starting to talk about how bad this could end when they scored against us. Kroos’ goal certainly was a fine finish, but it had a too well known smell to it. Possession ceded in the build-up, no one backing Vermaelen at left back against his two opponents, Koscielny almost intercepting the ball, but not preventing it from ending up in the net. Then I felt the game changed, and the team were unable to return to the way we played during the first few minutes.

After the quite poor performance and result in the home-leg, I did not expect the team to be able to advance; still hoping for the (im)possible though! More realistically, I was hoping for an entertaining game with a couple of goals. After arriving in Munich in the wake of disheartening games against Blackburn and the Spurs, I’d have taken a result like a 2-2 draw all day long. Finding out that Podolski as well as Wilshere would not be in the squad didn’t really make me raising my expectation either.

At 1pm we took a bus from Zurich to Munich and arrived there around 6pm, which left enough time to deposit our bags at lockers in the Ostbahnhof and going to a traditional restaurant near Marienplatz. We already had encountered quite some singing Arsenal fans in the streets and train stations. Only trusting one’s ear, it would have appeared to be a home game for our guys. However opening one’s eyes again one could see that many of the red-and-white scarfs actually bore the emblem of Bayern.

Then upon entering the restaurant, it had something with Augustiner in the name, the setting was quite the same, many dispassionate people wearing Bayern scarfs and shirts, and on a small table almost in the center of the room a group of Arsenal fans drinking beer, shots and singing about the Arsenal. It felt really great how they radiated optimism and believe in this situation, and I instantly felt a little more confident about the match. The beers that accompanied half a duck and some kraut with a dumpling did the rest.

We arrived just in time in the Allianz Arena glaring in (Arsenal-) red and found our seats at the same time as the referee started the match. I didn’t even make myself comfortable when I already had the first chance to jump out of my seat and shout with joy. GIROUD! In only the third minute! If we would score at that rate we’d comfortably win by 30 – 0, only a tenth of that was needed, though, allowing us plenty of time to seal the end of Bayern’s CL campaign.

For a moment no rational thinking was happening in my brain; I was just happy and wanted the guys to have a go at it. Unfortunately, we didn’t manage to score again until the 86th minute or so. Which did not leave us enough time to complete the task, still I was impressed by the display and there were some scenes that I will not forget that fast.

Besides the two goals, there was Rosickys tackle on Robben to deny them a counterattack. It was not exactly the tackle, but Rosicky’s reaction, that impressed me so much. Knowing he’d get the card, he just got up and walked straight back to help out at the back, with Robben lying on the floor where he left him. There was such a determination on display in this short scene.

Another good example, for the determination in the team, was when one of our defenders chased down Robben on their right wing, performed a perfect sliding tackle, got up with the ball on his feet and directly tried to start a counterattack with a fast forward pass. I think it was Jenkinson, and if I remember correctly his pass was intercepted. However, what remains is the strong will and determination shown to help out the team, run his socks of and give absolutely everything.

And then in the end, the away support. However much I would have liked to be seated (or better standing and jumping) in the Arsenal section, it was impressive and good to see how the away supporters were still cheering to the Arsenal some 5 to 10 minutes after the game.

In the subway on the way home, it felt weird. We had won and still lost. In the end, the feeling that managed to keep hold of myself would best be described as a mixture of proud and content. The miracle did not happen, but the lads worked really hard for it and almost did the trick. The Bayern supporters, on the other hand, went home beaten, in a downcast mood – even though they progressed. Weird things can happen in a supporter’s mind…

Well, nine games to go, 27 points to play for; one small and one rich team to overtake. Let’s see what happens. I myself feel quite confident that the guys are capable of finishing in 3rd or 4th place…

On another note, I really want to see the Arsenal playing at the Emirates: even more so, than before this last week’s fantastic experience.

Written by: Pope the Gooner, who is based in Switzerland.

This entry was posted in Uncategorized and tagged match preview, Supporting Arsenal, togetherness. Bookmark the permalink.

159 Responses to Forget about tactics, transfers and deadwood: THIS is what really matters!