Posted on December 5, 2014 by TotalArsenal 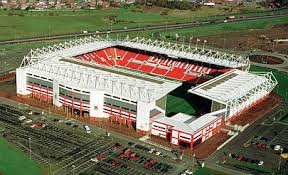 I have only been once to the Britannia and luckily we won; but, unfortunately, this is not the main memory I have from that notorious day. My boss back then was not really into football, but he wanted to ‘experience’ a Premiership game. He lived near to the proverbial hole that is Stoke and so I organised tickets for him, his eleven year old son and myself. I warned him in advance that he and his son would encounter some bad language.

The atmosphere in the stadium was pretty aggressive as relationships between the clubs and their managers were far from good. We sang that they were nothing more than ‘just a fecking throwy’ – a reference to Rory Delap’s towel-dried long-distance ball throws which landed like V2s in our penalty area on a constant basis. And they would sing ‘Rory is going to get you; Rory is going to get you’. Of course, this was all a bit of harmless fun, but the footie on the pitch was not.

The whole ‘let’s rough Arsenal up’ got an entire new meaning when Ramsey’s leg got smashed to pieces that day. It was a careless, vicious foul by Shawcross and one that will not be forgotten by me, or indeed many more Gooners who witnessed the assault at the ground or on TV. The fans were incensed and my boss and his son witnessed the sort of language and behaviour by the away fans they had never encountered before – but with good reason. He wanted an experience and he got one – one he will not forget in a hurry.. 🙂

The injury to Aaron rattled the players but leaders Fabregas and Super Sol guided us to victory, and I will never forget how the two pumped their fists in the air in front of the away fans after the game.

I have no doubt that things are a bit more settled between the clubs now. But, a combination of Stoke losing a few games on the trot and the continuous troubled relationship between Hughes (their current manager) and Wenger, as well as Arsenal really needing a win to keep momentum going and settle ourselves in the top-four, have the potential of this becoming a fiery, possibly nasty, encounter. And both Ramsey and Shawcross will be on the pitch once again, of course.

So, for me this is not a game for boys but for men. We need to keep our heads cool and yet fight fire with fire: never let them intimidate us, but match their physicality whilst outplaying them with our superior football skills.

We have our shape back now that Giroud has recovered, which is key for our ability to win this game: stick to our shape and game plan; stay solid and compact at the back and in the middle and attack them with focus and creativity – and take our chances when they come…

We need a strong spine throughout the team, and with Szczesny, BFG-Koz (hopefully)-Flamini-Ramsey and Giroud we will have it. My starting eleven are: Szczesny (Martinez would be okay too but I prefer the experience of Wojciech for this one), Gibbs (hopefully fully fit), BFG, Koz(or Chambers, if unfit), Chambers (or Bellerina), Flamini/Ramsey in the DM pivot, Santi in the hole, Welbeck and Ox on the wings and Giroud upfront. Keep Alexis on the bench for this one, just in case we need him: I would try and rest him for a week as he looks knackered to me (and therefore at injury risk).

Preferred (and more or less predicted team, depending on fitness of players): 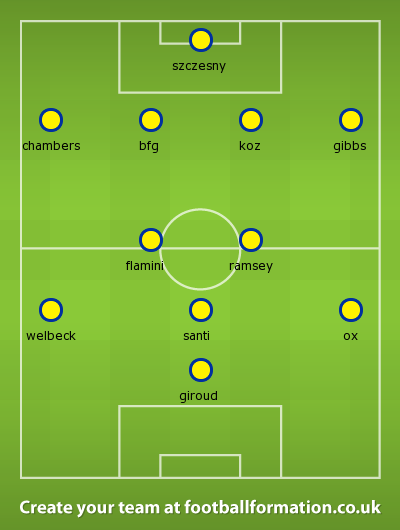 This team can do it, and with Alexis and Pod on the bench we have two strong game changers available if needed. May the Injury-Gods be with us! 🙂

This entry was posted in Uncategorized and tagged Line-Up, match preview, premier league. Bookmark the permalink.