A bit more than 24 hours to go for the NLD. It is fair to say that both sets of fans are feeling confident about this match. A text from a Spud mate read as follows: ‘I hear Sanchez is out and we have Bentaleb back: thing are looking up’. Both teams are on a good run and have a recent, big scalp to their name: The Spuds gave the Chavs a 5-3 hiding and we overcame the Northern Oilers at the Etihad.

It is fair to say the Spuds are going through another transitional season under the new management of Pochettino , and have had with a mixed bag of results until now. For example, they beat Leicester away in the league but succumbed to them in FA cup at home; they beat the Chavs at home but lost there by 3-0; they beat Villa away by 1-2 but then lose to Stoke at home by the same score the week after. In the league they do not score many goals (35, 9 less than Arsenal) but concede a lot (30, 5 more than Arsenal), hence their goal difference is only five, significantly less than the teams above them (Arsenal has a difference of 19). And in the league almost 80% of the Spuds goals are scored by just three players; Kane with 10, Eriksen with 9 and Chadli with 7.

So we know who to keep quiet and I reckon if we deny them space, play compact and attack them on the rebound, we have a very good chance to come away with a result. Should we approach them the same as we did with the Northern Oilers? That is the big question, if you ask me. Inviting them on to us and taking them down on the break is of course attractive. On the other hand, it would also be good to dominate them in their own half and get the job done as soon as possible. We have the players to do either and I wonder how Wenger will approach the game.

Key is of course the role of the three midfielders and whether we press high or not. With either Flamini or Coquelin we will give the back four protection, and then it is up to the other two midfielders to find the balance between supporting the defence and making the transition towards attack. I hope our defence will be allowed to play deep enough to avoid any risks of them being exposed by the Spuds.

They are likely to put a lot of muscle in the centre of midfield with the likes of Dembele, Mason, Bentaleb and Paulinho. To win the battle in midfield we need to match this physicality and overcome them with clever and incisive passing. This also requires a calm head, especially in a NLD, and as such, this is another big test for Coquelin, if indeed he gets the nod by Arsene. The biggest challenges in midfield are for the two players who play in the middle of our second ‘4’ in the 4-1-4-1 formation. Who should play there, and what should be their remit: sit back and keep it tight, or push forward and hem them in their own half?

I reckon Aaron and Santi are the obvious candidates for the two central midfield positions. They are in fine form and know how to execute Wenger’s tactical instructions. They know how to sit deep and make the transition forwards when in possession.

I don’t think Wenger will tweak his back-five for this match, so let’s move on to the front three. The big question is who should replace Sanchez’s goal threat and who can find the best balance in supporting the defence on the flanks, yet offer speed, ingenuity and control of the ball when in possession/on the break.

Giroud is a given, so who to play on the ‘wings’? I reckon we will need Ozil’s quality to unlock defences and add a much needed goal threat. The partnership with Giroud has also been fantastic in the last two games: it has been good to see Mesut and Ollie exchanging goals and assists.

That leaves one position, and it will be either Theo or Rosicky I reckon. Theo offers a great goal and assists threat and Rosa has that passion and offers better additional defensive support.

With Bellerin on the right, whose strength it is to add to our wingplay there, we might not need Theo as much, and either Ozil or Rosa can play in front of the young, blossoming Spaniard. On the other hand, Theo is so confident and has that wow factor, especially on the counter…. I have a feeling that Theo will lose out, but only just.

So my predicted line-up is as follows: 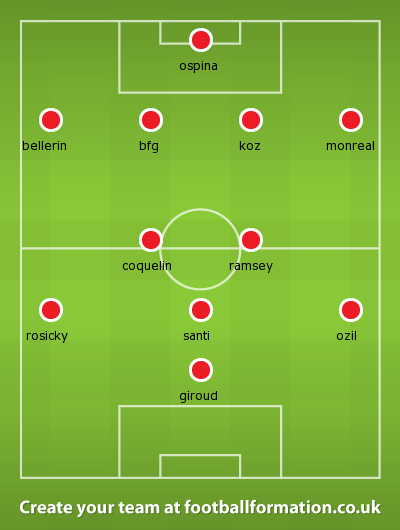 Let’s play compact, deep enough as a starting point, disciplined and full of passion – and our quality up-front and in the middle to shine through.

Let the mighty red and white cannon blow that skinny chicken of the ball. 🙂

Come on You Rip Roaring Gunners: Make Us Proud!