First I think I have to start with the game against Monaco. It has been a while since I was so furious, and this was when we were still at nil-nil. The performance was lackadaisical, complacent and lazy, and any other term you can think of. Tentative, SLOW passing, no effort to win the ball back when we lost the ball, which is fast becoming an Arsenal trade mark. Even after we concede twice, not much changed until the 89th minute. Honestly the less said about that game, the better.

Then there was the victory against Everton. A game which we won, but were dominated almost throughout. I mean we won yes, but I wasn’t impressed at all. This is not the Arsenal I have been supporting for a decade and a half. We cannot hold on to the ball in midfield to save our lives. Our passing is slow and laboured. That movement we had off the ball that allowed us to play the slick fluid game we were so well known for has vanished into thin air. Watching us try to force passing moves in a congested Everton box just wore my patience thin. Something has to change.

From where I sit, I feel like we need to go back to basics. Simply training harder on passing & more importantly moving. Training our technically gifted players on how, where & when to move in order to receive a pass and open up space for the rest and keeping the rhythm going.

So far it is like when Santi/ Ozil/Sanchez receive the ball, the rest watch him and wait to see what they will conjure up. Result? Dispossessing Arsenal has become like taking candy from a baby.

It is worth noting that another consequence of this is that every time we approach the opposition box, the player on the ball (usually Santi/Ox/Sanchez) is left to try something on their own, which again usually ends up one of three ways; wayward shots or shots directly at the keeper, losing the ball or passing backwards. There is an instance against Everton where I was watching Sanchez & Santi at the edge of the penalty box trying to pick a way into the opposition box and almost screamed. All the players around them were static so passing was slow and tedious, nobody had ideas and the result was just frustrating.

Many argue that teams sit deep and defend against us but those are just excuses IMO. Don’t they do the same against MCFC, CFC, LFC, even the Spuds? Haven’t they been doing that since we won the league unbeaten? So then why is it that because this current squad is struggling against those tactics it all of a sudden has become an issue? If you ask Cesc, Hleb & Rosicky what they had to contend with back in 2007, they will tell you the exact same thing. Defences parking buses in front of them. Somehow though, that never stopped them. 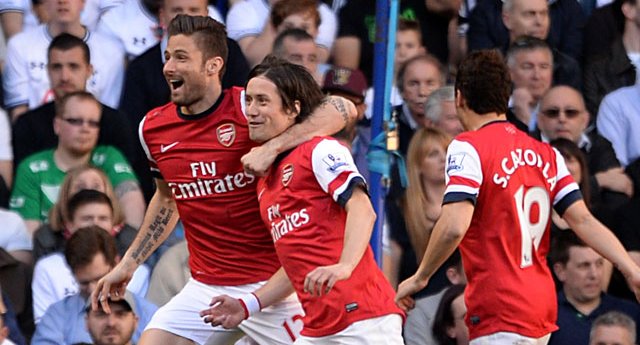 I feel like a broken record saying this but I will say it anyway. With the kind of players we have, this is the last thing I should be talking about.

I am not sure playing Ozil & Santi together is working. Why isn’t TR7 ever on the first team line-up? When he plays, we look more assured in possession. When he comes on we look more dangerous, more purposeful. I am not a coach so I won’t try to tell Wenger how to do his job but we do need to see results. And soon. Otherwise, we’ll just start losing our stars like we did for so long.

We surely can do much better.