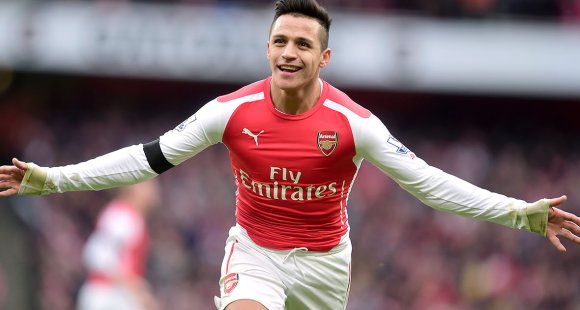 Finally this break for international football is ending and we can get back to real football–Arsenal football–and the final 8 matches of the Premier League season.  Not only that, but we do so with a highly anticipated match in our home stadium.  Liverpool, on exquisite form–at least until their most recent match vs Manchester United–were looking a real threat to grab a coveted top 4 position and try and do a bit better with another go-round in the Champions League.  With that 2-nil defeat at home, and the loss of two real leaders in Steven Gerrard and Martin Skrtl to red card suspensions, they find themselves very much on the outside, looking in.  Five points is not an insurmountable number but failing to get a result against either of their two nearest rivals (ManU and now us) could prove a psychological hurdle.

As such, I expect Pool, despite their depletions, to bring full commitment to the task and a nothing-to-lose attitude.  After an even worse early season than our own, with many calling for changes in management, Liverpool regrouped around defensive solidity.  Their matches haven’t been easy on the eyes and their fall out of Europe was rather spectacular (they failed to make it out of their CL group and lost over two legs to Besiktas of Istanbul), but they have also risen steadily up the English table.  Their away form has been particularly impressive and this match will represent an attempt to add to their amazing total of six consecutive away clean sheets.  If they could do that–and perhaps nick something in the other direction–they could be right back in the fray.

Arsenal, however, should be ready for this one.  Our squad is deeper, we haven’t suffered too badly over the international break, and we even have additional players returning to full fitness for the run in.  Competition for places has not been stronger at the club in recent memory and several players are hitting top form as the season comes to its climax.  This match could move us further towards a return to CL football, and set the stage for our next, even more massive, home match, two weeks hence, against Chelsea.

Of course, anything can happen on the day, so, as always, focus and patience will be watchwords.  I believe Arsenal have the quality to win this one, but commitment to overcoming whatever the opponent–and fate–have on offer will  be the true task.

Unlike our match at Anfield, which finished with a very disappointing draw from an injury time Skrtl header, I don’t believe Arsenal will set out to defend.  In that one, Liverpool had 73% of the possession in the first 15 minutes and had the better chances as the half wore on, but it was not until a Phillipe Coutinho effort in the 45th minute that they took the lead.  Arsenal responded instantly to equalize from a scrambled set piece, with Mathieu Debuchy getting the final touch.  In the 2nd half, still playing on the break, Arsenal took the advantage with a well executed counterattack: Olivier Giroud finished the goal through keeper Brad Jones’ legs after a calm 1-2 with Santi Cazorla and good work from Kieran Gibbs to spring the play forward.  Arsenal defended stoutly and Liverpool were further weakened when substitute, Fabio Borini took two yellow cards and reduced the home team to ten men.  It appeared we would escape with all the points, until a late corner was conceded and defenders missed their assignments and Skrtl powered home the demoralizing equalizer.

It should be noted, however, that Liverpool are a changed and much improved side since that match which served to open the festive period.  Simon Mingolet has been outstanding since returning to the #1 position.  Coutinho, in addition to some spectacular goals, has learned the value of a pass.  Raheem Sterling, mooted in the press as a future Arsenal player (or perhaps swapped with our own Theo Walcott) might be keen to impress.  Even Mario Balotelli has added beyond the presence of his physicality (and reputation).  Jordan Henderson has been given the armband by manager Brendan Rodgers and improved his play substantially, which will make the loss of Gerrard less damaging.  Adam Llalana might also play in a deeper mid-field role if he can recover from a groin injury.  Skrtl may be harder to replace but Kolo Toure, who might be given the job, will be keen to show Arsenal fans that he’s still a solid defender.  Rodgers may also opt for a central back 3 with wingbacks.  Players like Emre Can, Lazar Markovic and Alberto Moreno can get forward quickly and still be dangerous from these deeper positions.  Given the way the other match ended, set pieces will always present a problem.

I doubt Arsenal will sit back as they did at Anfield and will rather try and take the game to Liverpool.  Alexis Sanchez, a man who only can play at full effort, needs to recover quickly from disappointing international displays with the Chilean National team.  If it had only been the 1-nil defeat to Brazil (at our own stadium) I would not be concerned.  Losing 2-nil to Iran, however, along with his struggling for form since the new year is more worrying.  Still, I think this is too big a match to rest him.  On the other hand, Mesut Ozil has been talking big about winning a future Balon d’Or, and perhaps paces himself better for the long haul.  He’ll be keen to back up such a bold claim with assists or goals.  Santi Cazorla and Aaron Ramsey will also want to return strong.  Olivier Giroud, who continued his run of goals on duty with France, has stated a goal to finish ahead of Alexis as high scorer at the club this season.  In other words, despite Alexis’ difficulties and the fact that Danny Welbeck took a knock on duty with England, confidence in attack should be strong.

Defence may present some selection issues.  There’s no reason to drop David Ospina between the sticks, but Arsene Wenger may have a decision to make at center back.  Laurent Koscielny will surely play, but, Per Mertesacker, to many, is too slow and represents our past, while Brazilian Gabriel Paulista, fresh off his debut with the Selecao, will likely represent the future.  Mathieu Debuchy has recovered from his second major injury of the season but likely will wait at least a match before slotting back in at right back, having played in a mid-week Under 21 match.  This means Hector Bellerin likely plays in that position.  Fellow Spaniard Nacho Monreal seems to have made the left back position his, but Kieran Gibbs, having played and practiced with the large Liverpool contingent on the English National team, might also get the call.  Ahead of the back line, Francis Coquelin seems un-droppable.  It’s amazing to think that it was his late appearance as a sub in the reverse fixture which served as his first in Arsenal colours since his return from a loan spell at Charlton.

Here then is my call for the starting 11: 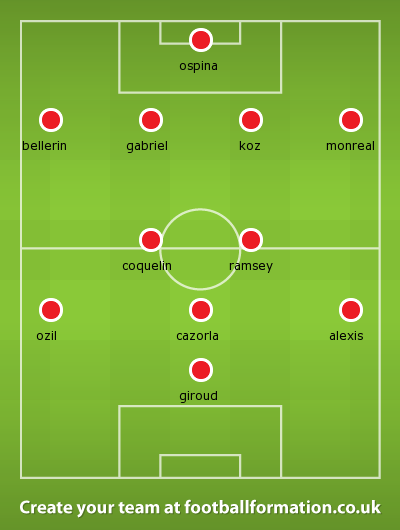 What do fellow Gooners think?  Might Wenger try and go a bit deeper into the squad or, like me, will he want his absolute strongest group out there?  In addition to the ever-present need to get a result and perform well in front of the always nervous home support, beating Liverpool would also bode well for our chances in the FA Cup.  They still have a replay in the quarterfinals (and a semi-final to win if they get through) but they are by far the highest rated opponent we could face at Wembley.  All in all, it’s a great chance for the team to make a real statement against another big club.

144 thoughts on “Arsenal – Liverpool: A Defining Moment in the Progression of Two Big Clubs?”