Arsenal – WBA Match Preview and Thoughts on the League Season

Arsenal host West Bromwich Albion on “Championship Sunday” in an almost meaningless match. Hopefully the weather is agreeable and it’s a nice day out for all involved. If we can rest a couple of key players and build a bit of confidence headed towards the FA Cup final at Wembley in a week’s time, all the better.

We could use it, given that Arsenal have been held scoreless in our last 3 home matches and only have a stress free Sunday by dint of a deflected Theo Walcott cross which found the net late on at Manchester United. If that ball hadn’t gone in we would need to win this match to secure 3rd place in the league and Champions League group stage football without a two-legged qualifier in August. As it is, United would need to win their match against Hull City while we lose ours and also erase a 7 goal margin to beat us on goal difference. In other words, theoretically they could take third, just as theoretically we could buy Christiano Ronaldo, Lionel Messi or Kun Aguero to give us that elusive “world class striker” so many Gooners seem to crave. More starkly put–it ain’t gonna happen.

So, barring a calamity of truly epic proportions–we will finish third. Some player rotation might offer signals before the cup final, but mostly it’s a day for the fans and the players to acknowledge their, er, appreciation for one another. Since I won’t be attending the match, here’s my chance to do likewise.

If we win, our points total will be 75, 4 less than a year ago. Nonetheless, in my opinion, this Arsenal team is much improved over a year ago. Recent results (we’ve won 1, lost 1 and drawn 3 of our last 5 matches) are a worry–as well as a primary reason we haven’t exceeded last years points total–but we hit our best form in the 2nd half of the season and look far more settled heading into the summer. We have a contract issue with one player (Theo Walcott) but he’s played a far less important role than the guy we lost last year (Bacary Sagna) who was our starting right back AND our 3rd choice center back. Moreover, despite having lost big chunks of their season to injury, players like Mesut Ozil, Olivier Giroud, Aaron Ramsey and Laurent Koscileny have all grown into more dependable presences within the squad. Jack Wilshere, Alex Oxlade-Chamberlain, and Danny Welbeck (bought at the September 1st deadline) have also suffered injury troubles, but, at times, have shown real glimpses of what they can add to the team.

Additionally, players acquired last summer have contributed massively. Alexis Sanchez, of course, deserves heaps of praise for taking England by storm and, in the Autumn, as others fell by the wayside all around him, taking the club on his shoulders, Atlas-style, and keeping us within shouting distance of the top teams. As others returned to action, his goal scoring dropped off, but his tireless tracking was a real feature in some of our new found ability to limit the opposition and stay in matches we had been blown out of in recent seasons. In the away matches against the other top 4 clubs a year ago we lost 6-3, 5-1 and 6-nil. This season, despite losing at Stamford Bridge 2-nil, we won by a similar scoreline at Manchester City and drew 1-1 (just a week ago) at United. We are no longer a soft touch in those big away matches.

Another player acquired last summer has played a major role. David Ospina, the Colombian #1, has taken over for Wojciech Szczesny as our net-minder. Acquired for just a few million pounds from FC Nice, some are unimpressed by Ospina’s smaller stature and somewhat weak kicking and believe this is an area for improvement through the transfer market. Still, he seems a calming influence and a very decisive keeper, able to come off his line quickly and willing to guess and dive early–often forcing finishers to readjust their 1 v 1 efforts. When it doesn’t come off it can look bad, but when it does, it saves a goal. As much as Ospina has relegated Szczesny to the bench, I don’t think the Pole in goal’s time with us is over. I believe he will play both this weekend and in the cup final. If he passes those tests he could easily be the man between the sticks for the very early start in the season to come. Overall, the competition between the two has done nothing but help.

Younger players are creating the same effect elsewhere. Hector Bellerin, a very fine attacking right back and all-round footballer, has made the injuries to Mathieu Debuchy, the summer signing charged with filling Sagna’s big shoes, almost a non-issue. Callum Chambers, another one bought over the summer, also did good work in that position (and at center back) and gained enough first team experience to step in if we need him. January signing, Gabriel Paulista, another young center back, did very well in his handful of outings to also look ready and able if Laurent Koscielny or (more likely) Per Mertesacker were to appear not quite up to the pace. Most impressively, the presence of Francis Coquelin, back from a pair of loan spells, transformed Arsenal into a team which looks as if it were both willing and able to play in a defend-first style. After all the goals and other happier moments of the season are reviewed and discussed, the most telling image of them all might be our Coq standing tall and yelling at his mates as we absorbed pressure in the season-defining match at Manchester City.

That we needed Coquelin so badly tells a story of its own: mostly that the deeper lying midfielders and some members of our back line are showing their age. Captain Mikel Arteta was another player stopped by injury from making a real contribution and Mathieu Flamini looked better as a late sub to protect scorelines than as a player ready to hold one of these positions. (The less said about the hoped-for recovery of Abou Diaby, the better.) Ultimately, Santi Cazorla, usually seen as a #10 or playmaker type, dropped into a deeper role alongside Coquelin and looked the part. His ball control and ability to stroke the long pass–with either foot–are exactly what the position demands even if he won’t contest too many headers, no matter how high he might gel his faux-hawk. Similarly, another Spaniard, Nacho Monreal, stepped up as a stop-gap at center back, but then also made his preferred left back position into his own, despite the best efforts of Kieran Gibbs to nail down the spot. As much as recent comments about our lack of goal scoring will drive the summer transfer talk, outside candidates for these less glamorous positions will also get plenty of print in the back pages. My hope is that we take care of our business early and give whoever is set to compete for these spots as full a pre-season as possible.

If we can do that and have a bit better luck with injuries I see no reason this squad cannot continue to grow and improve and at least compete for the league title. Through all the difficult moments and the tough criticism rendered by our always demanding supporters, the group seemed determined to stay together and work for one another and manager Arsene Wenger. As much as fans were calling for his head during the darker times–the “thank you” banner in the reverse fixture at West Brom was a real low point–the man and his players seemed to see the bigger picture, which will include securing automatic CL qualification and the cup final. It’s not the limit of our ambitions, of course, but, to me at least, it’s a step in the right direction.

So, back to the match at hand. While some Gooners might want us to wrap our best players in cotton wool (which seems a weird one–aren’t cotton and wool different fabrics?…) I think the majority of the group needs another chance to try and break down a team playing for a nil-nil. Tony Pulis, right up there with Jose Mourniho amongst the greatest of all the bus parking managers, and his boys from the black country should provide a stern test and be able to defend at least as well as that other Birmingham area club we play in the cup final. They’ve also got a fine finisher in Saido Berahino who could trouble us on the break. Chris Brunt is the on-field (and very feisty) face of Pulis’ team and veterans Jonas Olsson and Joleon Lescott, while not the most mobile pair, have worked well with back-up keeper Boaz Myhill–a guy who has almost done enough in place of injured Ben Foster to deserve a call up to the England squad. West Brom stumbled a bit in the early Spring but clearly are finishing the season well.

We may hope that they’ll be satisfied after their 3-nil gazumping of the league champions a week ago but that’s not the sort of attitude which made Pulis the man he is. As much as we might want to rest and rotate a bit or at least send out some of our more athletic types, I think Wenger will want a not very changed group to have another 90 minute effort against another team set up to stifle, while maybe suggesting that our guys remain ever alert to jumping out of the path of WBA’s more gratuitous and agricultural challenges. Injury news seems scant from Wenger this week, so here my guess at the 11 I think might play: 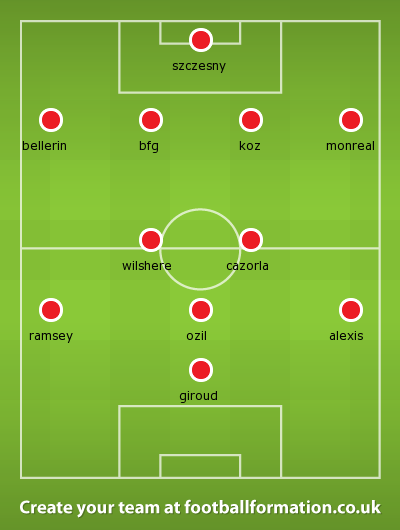 Who do you think will or ought to play? Is there a desire to talk about the season as it wraps up or just to put it into the rear-view and build for the future, i.e., dive into the transfer market or at least that sort of speculation? While I know the full measure of our season hinges heavily on the outcome at Wembley, I also feel our comeback in the league shouldn’t be under-appreciated. Others may feel differently, especially since the league winning streak–8 in a row between the defeat at White Hart Lane and the draw at home to Chelsea–has come to an end, but I think we found a way to play a reasonably reliable brand of winning football. Clearly we can still struggle with teams who have come to thwart our attack but there is a sense–for me, at least–that we’re on the right track. Or maybe not. Eye of the beholder and all that. What do my fellow Gooners think?

Given the high expectations surrounding our club, the end of the league season might come with a sense of relief. Hopefully tomorrow’s match is a good one and we move onto the national stadium and the cup final with a feeling of confidence–not to mention good will or even (dare I say it…) a bit of love and affection between supporters and club.