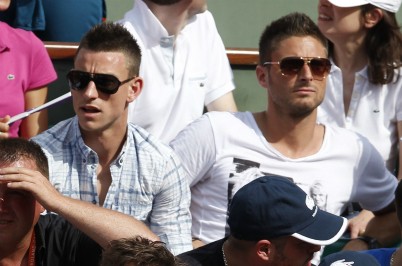 No sunglasses for these two as they will be suiting up for hosts France this evening in the opening match.  Who else from our club will be representing their countries at the tournament?

It’s not really a long list and a couple of those players will very likely be gone from the club next season.  There’s also another tournament happening here on my side of the pond, the 100th anniversary (el Centenario) of the Copa America which also features some Arsenal talent, notably Alexis Sanchez with Chile, David Ospina (Colombia) and Joel Campbell (Costa Rica).  I’ve watched a bit of that one.  Has anybody else?

Of course, beyond watching the dozen or so of our boys in action in these tournaments there is always scouting for would-be Arsenal players.  It is transfer time, after all.  Personally, I need a break from the surprise news about our interest in Jamie Vardy, but I might be in the minority.  Now that he’s put us on hold (or used us to get other clubs, including the one with whom he won the league, Leicester City, to stump up and better our contract offer), he’s another one to watch.  Certainly Arsenal get linked with just about any (and most all) high profile players who appear to be on the move from their current club.  Is there anybody you’re watching this June who you’d love to see in the red and white of Arsenal?  Are there others you rate and worry they’ll land with an English rival?  Bergkampesque doesn’t follow each and every potential transfer scenario but that doesn’t mean you shouldn’t torture, er, do so, yourself.

So, have at it.  Tell us your thoughts about Arsenal players, guys who could be Arsenal players or anything else you want to discuss.  I’m not overly partisan when it comes to the international game, but there are teams and countries I pull for over others, although, truth be told, it’s often because Arsenal boys are playing with them.  In the Copa America I’m pulling for the home team (Mexico 🙂 ) while maybe hoping Colombia have a strong tournament with lots of Ospina saves.  (Argentina look the obvious favorite.)  Given the quantity of stick Olivier Giroud receives from both Arsenal and France fans (plus my love of Laurent Koscielny) I wouldn’t mind the hosts winning which might also serve as a balm for football and peace among nations after the tragic events from earlier this year when France’s friendly against Germany was interrupted by terrorist explosions.

New look Spain, I think, will benefit from Hector Bellerin’s aggressive wing-back play but will sorely rue their decision to leave Santi Cazorla (the obvious “next Xavi”) off their team.  I’m also hoping Ozil has a strong tournament for the world champions.  Sorry, but I can’t get too deeply behind the England squad–unless Roy Hodgson gets Jack Wilshere in there to pull the strings.  The England-Wales match, featuring the blonde bombshell (Aaron Ramsey) should be an interesting group game.  Likewise, the battle between the Xhaka brothers (Switzerland-Albania) tomorrow could also be a good one, even if it’s just to make sure we bought the right one!

How about you?  Do the patriotic heartstrings get pulled for a particular national team or do you watch more as a neutral?

We’re on a bit of a holiday here at Bergkampesque–at least when it comes to writing new posts.  Still, the goal here is about participation, discussion and good-spirited debate.  Being that it’s not the regular season with all the usual (and, perhaps, all too entrenched) Arsenal arguments, the summer tournaments are perhaps the perfect platform for easing back into the blogging.   So, let’s be having your predictions, observations, thoughts; your hopes and dreams, disappointments and disgusts, heroes and villains, etc., etc…

like Rosie (my Arsenal watching friend from the Compton Arms would say, white wine in hand…) would say…

22 thoughts on “Arsenal at the Euros: Who Will You Be Watching?”