The Ludogorets Arena will always be remembered for that Ozil display of foot-ballet. Yes there was also a mighty comeback, and the best ones are always those when a team are 2-0 down and then win 3-2; yet this was somehow to be expected. But without any doubt, Mesut’s demonstration of total control of time and space whilst caressing the ball with his feet, will become immortalized in many a Gunner’s red and white brain.

You do not want to make this Arsenal side angry, as Sunderland and Ludogorets have now experienced in the space of just a few days. It took the new team, without the normal ‘midwingers’ Theo, Iwobi/Ox and second choice full backs, Xhaka restored to the double DM-pivot and Ollie as our CF, a while to get into the groove. It looked more like 4-5-1 than anything else; as a result we had an army of central midfielders trying to dominate proceedings.

Before we could take proper control of the game, we were two goals behind. That’s football!

Did Arsene make too many changes to the team? Was playing with OG up-front too much of a tactical change for in-form Arsenal? I reckon we needed to rest Ox and Iwobi who looked tired against Sunderland on Saturday. Playing Alexis on the left meant we could start the super-fresh legs of Ollie and Rambo in the front three, so it was a one-off compromise to me. And having Nacho and Bellerin back fresh and focussed on Sunday will also help our cause in defeating the Spuddies; so playing the limited Jenkinson and Gibbs was another compromise we got away with.

A teasing cross, from a wrongly awarded free-kick, kept Ospina rooted in goal and our defenders struggled to cover the attackers. A clumsy goal to concede but there you go. Soon after that it was 2-0 to the Bulzilians: Gibbs got skinned and a cross was put into the box from close range; Koz went to block it but was too late and Mustafi, not for the first time in recent games, allowed an attacker to squeeze between him and his fellow CB and beat Ospina on his left. Upsidaisy, that was not part of the script.

To Arsenal’s credit, the boys did not panic and started to attack with more intensity. There was still a lot of miscommunication and bad passing of the ball, but with so much individual quality in the team we had a good chance to get back into the game. And soon we did. Ozil, who at the start at the game had missed a glorious opportunity to give us an early lead, crossed the ball to the edge of the box from the by-line and there was Xhaka to score ala Giroud on Saturday with a finely placed left foot shot. 1-2 and game on.

Ludogorets kept defending really well in numbers around their box but it was a simple floated cross by Rambo from the flank and an easy header past the goalkeeper by Ollie that undid them. They had prepared for the Sanchez-as-CF Arsenal but forgot to practice the classical Giroud areal threat… to devastating effect.

Equalising before the break was just what we needed and the last thing the Bulgarians had wanted.

The second half was a lot of hard work by both teams and it looked like we were going to settle for a point in the end. But there was Mesut Ozil who felt it was time to show us all how good he is again. Giroud steels the ball of a midfielder and it ends up with Elneny. The Egyptian has no hesitation in putting the ball brilliantly over the top to the German maestro. Mesut’s first, deft touch is exquisite: it keeps to momentum of the ball going but it is now under the spell of the magician. The keeper, Borjan, does well to spot the danger and comes running out; Mesut spots Borjan and then eliminates him instantly with an out-of-this-world half circle scoop only the very best are able to produce. But he is not there yet as a few eager defenders have made their way back to block any of Mesut’s attempts to shoot on goal. The German spots the danger and decides to ballet-dance his way to goal with the ball magnetised to his feet, fooling the defenders who subsequently end up on the floor and then slotting the ball home with total composure. 2-3 to the good guys! 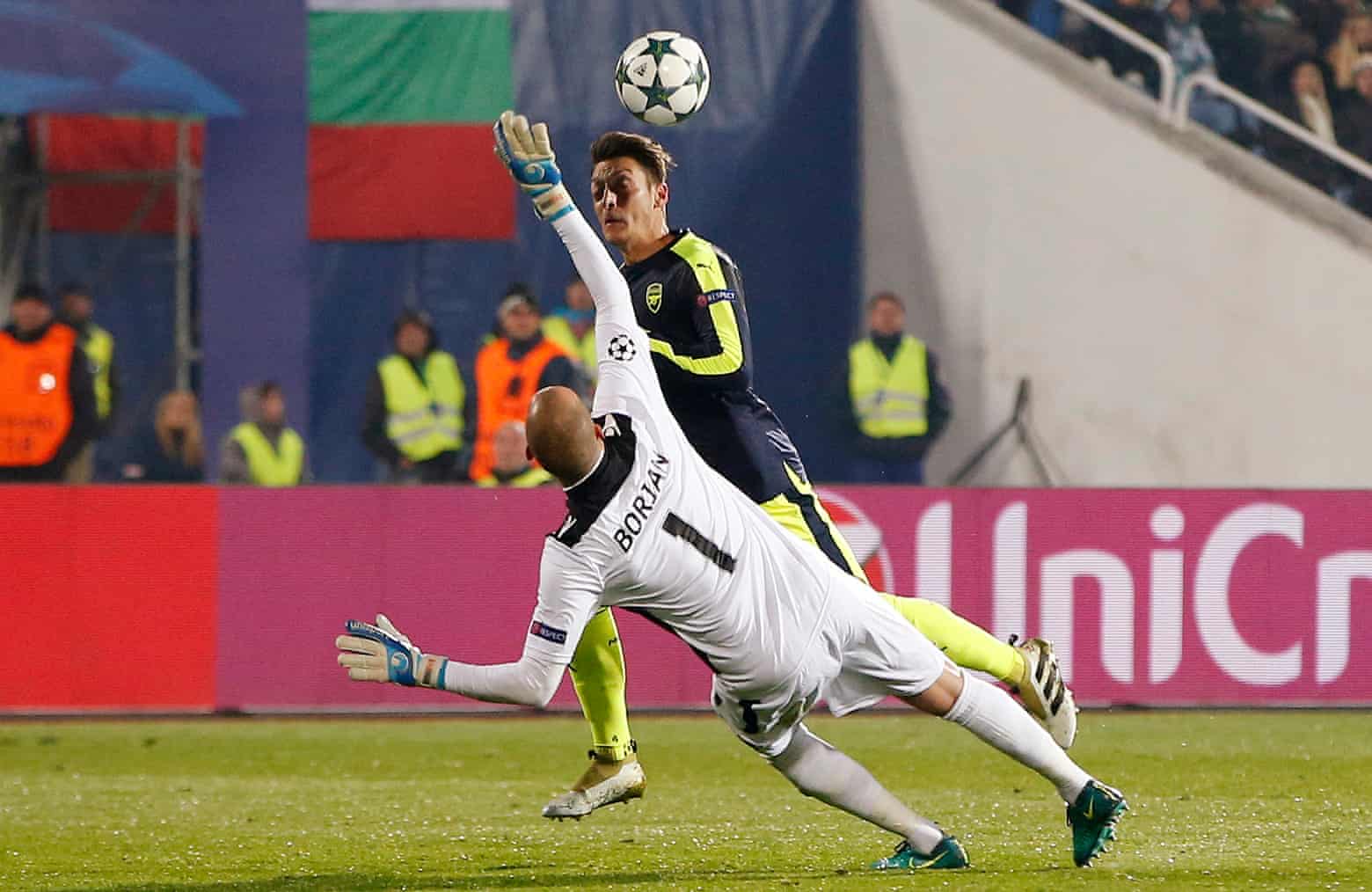 More CL football in 2017 for the mighty Arsenal, even though we have two more group games to come. A job well done, decorated by one of the finest goals we have ever seen. Ooh to be…