Two great guys, but will they still be at Arsenal in 2017?

Alexis and Giroud to run the show? 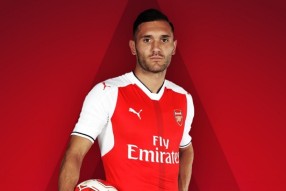 Last Tuesday’s unexpected setback against the Hornets hurt us, but not as much as it could have done. Virtually all our competitors for the title also dropped points, so in the end not much damage was done. Of course, it was a golden opportunity to close the gap with the league leaders and put more distance between us and our other title rivals, but the team were poor in the first half and then could not make amends in the second half, despite a valiant effort.

Of course this is just what football is like sometimes; how many times have we experienced such a game – in which we lose to the underdog – in our lives?! It is also what makes football exciting, even though it is nasty to be on the losing side. But we Gooners are just so desperate for success that losing a game is always experienced as a catastrophe, and our response is seldom philosophically: we need victims and we want to see changes. And ideally somebody gets sacked. What about using adversity to galvanize the troops: change nothing other than our focus and passion for the next game? That is what good managers do. Show believe in your team and utilise the available energy to get back to winning ways.

Well, Wenger and Bould will not  be feeling great right now, but the last thing they will do is give up, blame some of their players, or totally change their philosophy. As per 17HT’s fine comment yesterday, the real challenge they are facing is sorting out the double DM pivot. Yet most fellow Gooners, here and on other blogs, are desperate to see Giroud benched and us to go back to speed and mobility in attack. I can see where you are coming from but scoring goals is really not anything for the management to worry about right now. We produce many chances and score plenty of goals, much better than last season.

No, the real issue is making us more compact in defence and far more impenetrable from the midfield area. Le Coq and Rambo have not been a successful combo in the DM pivot in recent games, and it looks like Aaron will be out again for a while. Wenger could opt for the Ox but that would be very unwise in my opinion. Playing against a third string Saints is very different from playing the Chavs at the Bridge. The ideal man, and in my opinion the most modern and allround defense-minded midfielder in our squad, Elneny, will unfortunately not be available. Santi would also be pretty ideal but is not available.

Wenger could either go for Ox, or a more robust but less experienced option in Maitland-Niles, or he could opt for moving Debuchy, Gibbs or Monreal into midfield. This would add defensive steel but would deprive us from extra attacking power from midfield.

It would also indicate to the rest of the team and our opponent that we are scared of them. Fact is, we need to win to get our title challenge back on track and reunite the fanbase.

So let’s go for all out attack, I say. Allow Coquelin to sit deep with the CB’s and play 4-1-2-3, which often looks more like 3-4-3, or even 3-2-5. I would like us to attack the Chavs with conviction and not sit back to play them on the break. Only then I reckon we have a good chance to win this six-pointer.

This is the line-up for it:

Yep, Alexis and Ozil behind Giroud to work with and off him and to force the league leaders deep back into their own half. Welbeck and Perez to add fire power and close ball control from the wings and in the box, and press the Chelsea FBs right back where they belong. With Giroud, Alexis, Perez, Ozil and Alexis we have total variety in attacking ability and power, and with Nacho and Bellerin we can offer additional width. Yes we will be vulnerable to counter attacks, but so be it. We have the speed, athleticism and strength in the team to deal with it. But most importantly, we take the game to them and never let them breath until the job is done. We can play like this and what have we got to lose. Let’s play football the Arsenal way. That’s what I would like to see. What about you?

33 thoughts on “How to win on Saturday: Alexis and Ozil behind Welbeck-Giroud-Perez”