Oh the sweet uses of adversity, as Shakespeare once wrote. No CL football means that Wenger can play about two different squads throughout most of the season, and this, my fine fellow Gooners, is great, great news. 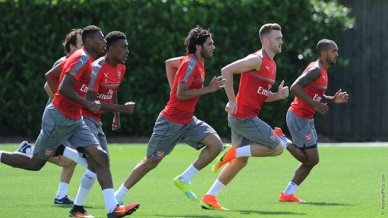 We have a lot of good players in the squad and a number of youngsters who could make it into the first team. In previous seasons, these sorts of players would simply not get enough chances to play regularly enough to get to PL/CL quality levels. The experienced fringe players need regular, meaningful games to stay fit, focussed and enthusiastic, and for the young players it is absolutely vital that they can play regularly in competitive games in the red and white shirt.
The combination of midweek games in the UEFA League and League Cup mean that both sets of players now get plenty of opportunities to play meaningful, competitive football. Would we be playing in the CL, this simply would not be the case. Instead, our first team players would have to be played twice a week with all the risks of injuries, fatigue etc. Currently, only Mustafi and Welbeck are not (yet) available (and sadly Santi of course); the rest is fit, rested and keen.
So it is great news that Arsenal play at home against the Spuds-mashing Hammers in the next round of the League Cup. It will be a big battle and another great opportunity for the youngsters to get real-game experience. This will allow them to grow further and test themselves against PL opposition. West Ham will be up for this and the atmosphere in our stadium, the home of football, will be great. The experienced fringe-players will also enjoy playing in this one. And if we were to go through, Arsenal’s ‘second’ team will get a double bill in January – home and away. The more games for them the better!
It also looks like we will survive in the UEFA-Cup, which means more great tests for our youngsters. At the end of the season, Arsene can judge much better who is ready to be added to the first team squad and who should go on loan, sold etc. There is every chance that at least one, if not more, of the youngsters will be ready to join the first team come July next year.
There is an argument that Wenger will be tempted to play (lots of) first team players at some stage in both competitions and this could be detrimental to our PL campaign. I reckon that will not be the case, other than the odd player who needs another game to get fully fit or put into practice a certain tactical adjustment in their play. Wenger may involve more of the first team squad if Arsenal were to get to the quarter or semi-finals of the UEFA Cup, but surely that would be worth it then.
In a nutshell, I can see only advantages in us still playing, and continuing to play, in the League Cup and UEFA Cup: the first team players get plenty of rest, the experienced fringe players get plenty of meaningful practice and game-time, and the youngsters are provided with a proper platform to gain much needed real-game experience and show us what they are capable of. WIN WIN WIN!
By TotalArsenal.