Ramsey Runs Riot and Will Surely Follow the Ox Outta Ouch-senal.  Our Opponent Was No Good AND We Failed to Put Them Away. Etc., etc. 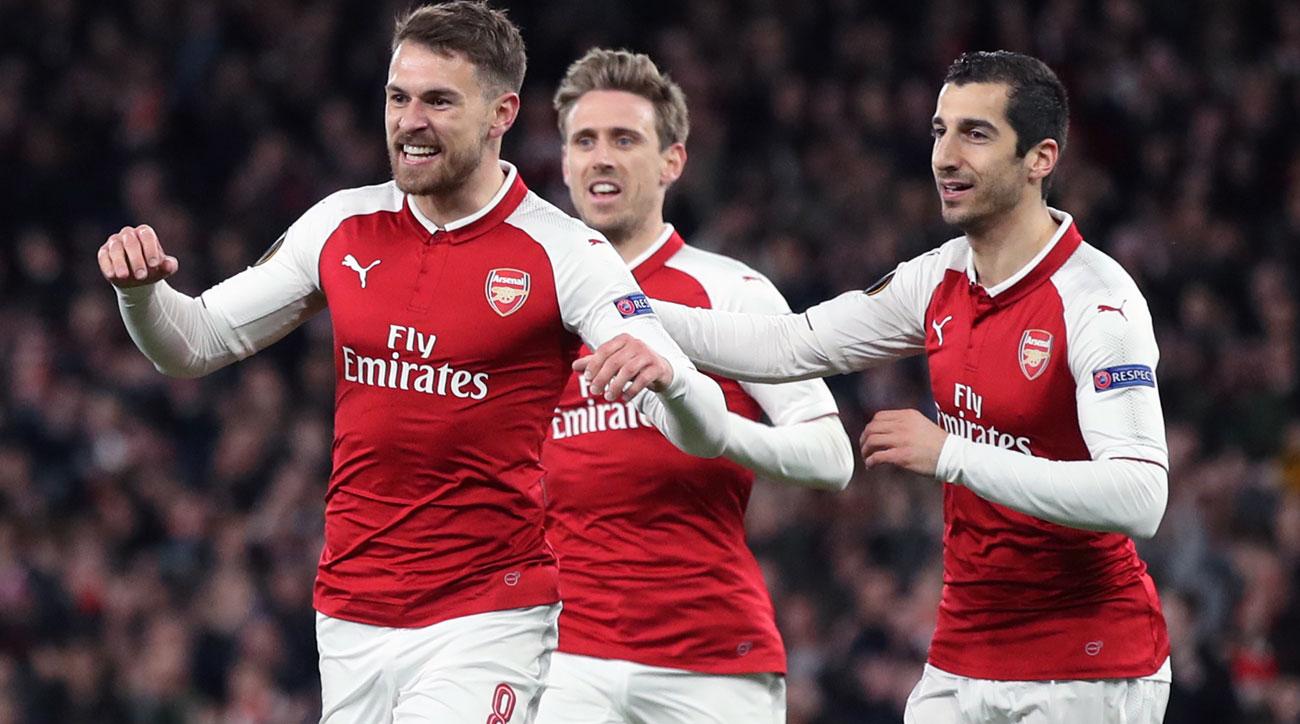 How many other ways can Gooners find to ruin a fine display of Arsenal football?  There must be a million, what’s your favorite? Please join us here on Bergkampesque and tell us why Arsenal (and, you…) are miserable?  Or look for us on Twitter… #nosuchthingasahappygooner.

Ramsey, why are you smiling?  Has Klopp just called you with a contract offer?

I jest, of course, but, if you’re a Gooner and you cannot enjoy that match, why bother?

From the kickoff, when Arsenal got a feel for the pitch by stroking the ball around the with some longer passes, I had a sense that we’d have some time on the ball and that pitch-space was there for the taking. Nobody knows these CSKA players, but there were some good anecdotal reasons to fear the opponent. They were playing an extra defender, i.e., a back three of experienced (or aged) defenders ahead of a name between the sticks that I did know: Igor Akinfeev.  As such, scoring would be difficult. Nil-nil, however, isn’t the worst scoreline to take back to Moscow given the away goals rule.

Except, of course, this is Arsenal, so giving up an away goal or three–the number CSKA scored at Lyon in the previous round–is a given.  Oh dennis, this means we must go for broke. Anything less than three of our own won’t be enough. Or maybe four or five or six. If you’re a Gooner you’re gonna worry.  No.Matter.What.

But that’s all pre-match.  Now, with this one in the books what can we say?

Well, I’ve got several observations, I’ll pick a nice even number.  How about Eight? 😀

1. THAT was Arsenal Football.  Open, attacking, easy on the eye generally and scintillating at times.  That’s what Gooners should be able to enjoy.  Like the scoreline, it’s not perfect.  If perfection is what we’re demanding, however… Well, back to the hashtag, I say.

2. Arsenal have a core of players who understand spacing and can exploit it to make chance after chance and dominate matches.  Mesut Ozil and Henrikh Mkhitaryan, ostensibly starting as inverted wingers, know how to move wide, narrow and (even) across into each other’s “positions”  Once these patterns of movement have begun, the widest spaces open up for our fullbacks, Hector Bellerin and Nacho Monreal, to bomb forward and aft. Aaron Ramsey (more on him below) does likewise in more central channels, of course, while guys who don’t quite have his engine–our other central mids, Jack Wilshere and Granit Xhaka–work smaller areas in the center of the pitch, but under less pressure, because, you know, there is more space. This TEAM game is the essence of playing attractive, attacking football.  Ozil can’t do it by himself, nor can our new guy, Mkhi, who helps k(h)nit it all together, nor can anyone else in the team. This is total football, Arsenal style, and, in my view, is something to be celebrated to the heavens.

3. We must now hope that Mkhitaryan’s injury is just a bruise; Mohamed Elneny and Alexi Iwobi are skilled enough to fill in for Mkhi, but do they have the vision to fashion space for themselves and their mates in the same sort of way?  There I go showing my Gooner colors; on this front, I AM worried.

4.  Moves must be finished, and, four times they were, in excellent fashion.  Ramsey’s 2nd goal will stand out, of course, but his first was executed just as well.  Just as the team will lament not making this one into a cricket score, Rambo will lament not getting the hat-trick with his late smash off the post, but his early (non) goal, taken off the scoreboard by the most marginal of offside decisions, had perhaps an even more impressive element: AR8’s burst of pace that broke Arsenal through the lines and onto the counterattack.  We need a fit Rambo. If he can take a lead role in another trophy–he’s hit key goals in 2 of those 3 FA cups we’ve won recently–he will deserve remuneration with a sizable new contract at our club.

5.  The other goal scorer, Alexandre Lacazette, as Steve Bould recently noted, is more than just a finisher.  His hold up work was notable on the fantastic 3rd goal, while he often popped up in good “false 9” spots to help keep possession repeatedly during the match.  The finishing, however, should not be ignored.  His penalty, his second in 4 days, was again struck into the abandoned half of the net with full force and commitment, while his off-footed out-swinger was unsavable.  There is a focus and intensity in Lacazette to match his lightning fast (and usually correct) decision making.  It’s only been 100 minutes of play since his return to action, but the issue that required surgery might have been worse than we thought.

6.  Other teams will score goals.  Arsenal’s defensive frailties will be highlighted for the goal we conceded.  Mustafi’s weird (non)clearance, Xhaka’s pop-up and Koscielny’s obvious and unnecessary foul will be cited but I think we should note the glory of Aleksandr Golovin’s free kick and twist things positively.  We have been linked with the 21 year old before, so GO (get us some) LOVIN. We are a big club and we could offer good wages and a nice transfer fee. In open play Golovin looked good enough, last night at least, to fit right in with our style of play.  I’d do it before the World Cup where surely Aleks will be a bright spot for the host nation. With the departed Alexes (well, Alexis Sanchez and Alex Oxlade-Chamberlain) taking their strong right feet with them, the free kick ALONE makes Golovin a very intriguing transfer target.

7.  I want to talk more about the Ox, but in a different context.  Our stadium was fuller, but still, plenty of empty seats were to be seen.  If you’re a ticket-buying Gooner who chose to miss this one you will likely find a reason (or ten) to rationalize your choice.  In my view, you missed some good football AND you’ve adopted an attitude which will not help your team. It’s your prerogative to demand entertainment and decide when none can be found.  Let’s check recent remarks, of the Ox, however, about playing for his new club.

He doesn’t mention his previous club, but the silence about Arsenal is akin to the (near) silence in our home stadium and is very much at odds with the “You’ll Never Walk Alone” spirit at Anfield.  It will take individual decisions to form a collective atmosphere that turns guys like our (disappointing?) Ox into a player who makes special goals into parts of special wins. As supporters we have very little power over what happens on the pitch.  Nonetheless, our fine stadium–like any stadium anywhere, I believe–could be converted, into an Anfield-esque “terrible” place for opponents to play. Instead, it’s middling, at best, hardly a home for the type of football Gooners purport to desire. First, the stadium, next the Goonersphere.  Let’s turn this around. These places–our home stadium; our blogs, etc., etc.–shouldn’t be terrible for places…for us…

8.  Petr Cech is our goalkeeper.  Did he make a save last night?  I can’t remember one. Golovin’s free kick was just too good.  For the remainder of the match, Cech came off his line decisively on a few occasions and gobbled up balls or forced CSKA players to rush their shots off target.  With David Ospina’s injury now looking to be “at least a few weeks,” I think we’ve seen the last of the Colombian, although he probably has a chance to show his stuff at the World Cup this summer.  There are others out there with similar opportunities.  I’d expect a new keeper (young and very promising) to be brought in this summer to push Cech next season.

OK, as always, I’ve got more to say, so, observation number…

9.  This tie is not over, except that it is.  These two legged ties are games of four halves. We got our nil-nil in the 2nd after a fine 1st half of 4-1.  I GUARANTEE that we will do just fine in the remaining halves in Moscow to book our spot in the semi-finals.  When is the draw?  Worry all YOU like. We will score next Thursday in Moscow, meaning that CSKA will need FIVE goals to beat us.  Again, when is the draw?

Those are my observations/views.  What say you?  To me it was a good night and something to be enjoyed. It’s just one match (but on the back of a few other good results, 5 wins from 5, I think, and 15 goals vs 2 conceded).  I don’t want to over-sell things and I could find quibbles of my own to focus upon, if that’s where we feel we must go.  It’s a rainy day where I am, so come on out and I’ll play…