The Top-4 trophy was derided by many of us but loved by the man who caressed it for 20 good years without fail. It is in the nature of man not to value that which comes cheap. After only 2 years without it we would give all the sweat in this world for 3 pts at Old Trafford as that would aid our hunt of that Top-4 trophy. Wenger is a very insightful man but maybe he is a little less smart than Sir Alex Ferguson who timed his exit to perfection …. well to perfection in terms of himself but in terms of the fortunes of the club, his timing was utterly miserable. 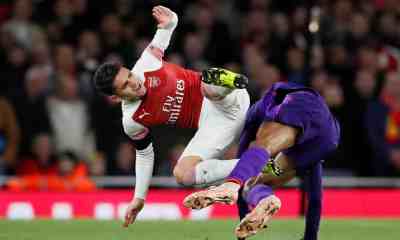 While Emery has opened the windows of the room vacated by Wenger, Joseph Mourinho seems to have taken over the role of presiding over the demise of Man U’s campaign of this season. As we head to Old Trafford, we smell blood.

Still we have to be wary. All said and done Mourinho is an old fox and Man United have a way of busting back into life when we come calling. They love to halt us on our tracks just as they did to the Invincibles 49 game unbeaten premier league run. If am to guess, Mourinho who hates having buses parked against him, would park a fleet against us, and hope to catch us on the break with his powerful, fleet footed forward men of Lukaku, Rashford and Martial. But never bet on what an old fox can come up with. Maybe it’s better we spend this little precious time talking about ourselves.

Against the Spuds Emery started with a 3:4:2:1 formation. We were on top of the Spuds but found ourselves trailing I-2 at half time after their questionable goals. On resumption, Emery changed to 3:4:1:2 (replacing Mkhi and Iwobi with Laca and Ramsey). This was his first time of playing Auba and Laca together up front. Ramsey at #10 with his Rolls Royce engine was continuously motoring up field between the front duo. The Spuds couldn’t live with it and we equalized. Mustafi  got hurt (replaced by Guendouzi) and Emery changed again to 4:3:1:2. In that midfield three, Torreira became freer to roam providing the team with a more dynamic balance up field as the wing backs reverted to full backs. Again the Spuds couldn’t live with it and we were able to score 2 more goals.

So what should we expect from Emery at Old Trafford? Xhaka is suspended. I expect Goundouzi to take his place and Torreira to play a conservative role shielding the back line. Kolasinac at the moment is un-droppable. He gives so much to our offensive play on the left which is our main attack route. That should mean a three man back line. With the wing backs stretching the field, the Ramsey-in-the-hole behind the Laca-Auba-up-front combo, Torreira and partner marshalling the central midfield, the team Emery has been searching for might just have emerged. Ozil with his back spasm remains a doubt but if he is available its him or Ramsey in the hole.

The beauty of this line up and formation is that our midfield is not weakened because Laca loves playing from deep while at the same time all three of them up front carry goal threats. I can’t see Mo keeping them away from the net all of 90 minutes. Would he dare open up? Kindly bear with me, am feeling a bit like a conqueror.

63 thoughts on “Rambo to Feed LacaMeyang but Who Partners the Ninja Warrior in Midfield? Preview/Line-up”