It’s Spursday football night again, except it is the mighty red and white playing Die Frankfurthers and not our firs and skins wearing NL neighbours. Having watched a few CL games, it is quite scary to see the difference in level and quality of football between the CL and UEFA league teams. It is sad to say that we currently play the sort of football that can only be scheduled for the Thursdays of the week and not Tuesdays/Wednesdays.

But that doesn’t mean we should not look forward to our match tonight. We will need something from it as Standard Liege and Eintracht are both four points behind us with still two games to go. Lose tonight and we could face a hot-waffle night in Eastern Belgium in two weeks time. The way we are currently playing, and the general feeling regarding our current manager, we should expect a tough night. Eintracht Frankfurt are in a similar position in the Bundesliga as we in the PL: they have 17 points from 12 games and are in 10th position (Arsenal are in 8th position with 18 points from 13 games).

Arsenal have, very peculiarly, floated the name of Nuno Espirito Santo as possible replacement for Unai Emery. Why have they done this? It seems unprofessional to do this when Emery is (still) in charge. Are they gaging the supporters’ response to the possibility of the Wolves’ manager becoming ours? You tell me but I don’t think the club should lower itself like this. Do these things behind the scenes and don’t put both managers in such awkward (at best) positions. 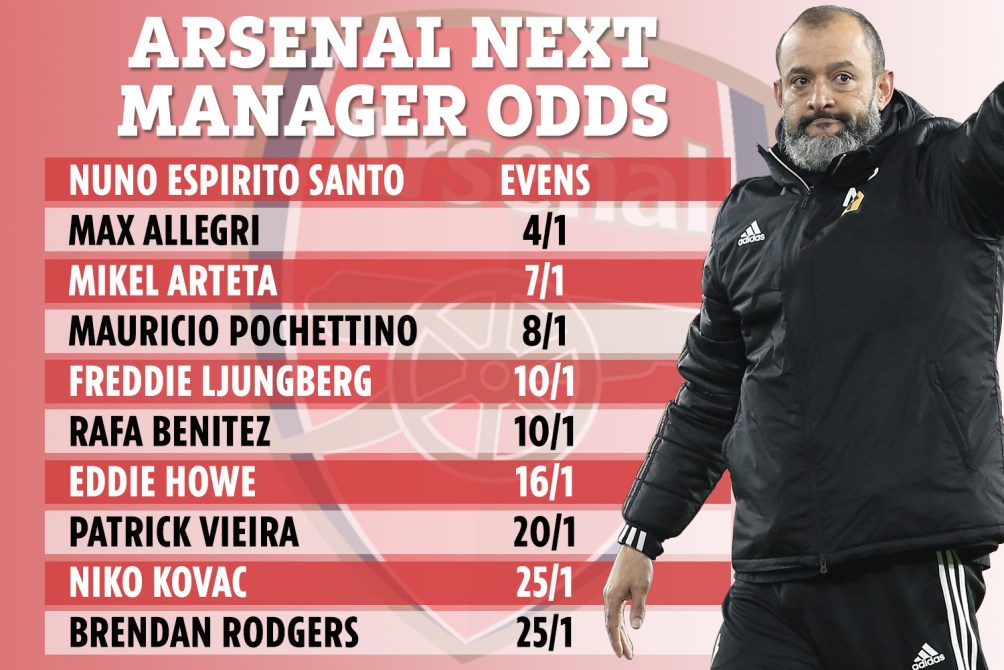 For what it is worth, I do believe Santo would be a monster at Arsenal, the monster of NES: he plays a good brand of football, speaks good English, gets the very best out of his players and team, and simply has done miracles with Wolves. Even more importantly, he gave focus and direction to the team and has created a winning mentality and lots of positive energy in and around the club. He would take Arsenal on a journey with a recognisable style and loads of fight in the team. I would sign for that right now.

The question is whether NES will want/ will be allowed to leave Wolves. I would love him to take over at Arsenal, but, perhaps paradoxically, would rate him less if he were to leave them in the lurch right now. If he could do it to them he could do it to us too in the end…

Given everything I wrote above, I reckon Emery will put up a strong team to get us over the line and save his Arsenal career for at least another few days. Mustafi will probably start but if Emery wants to play it a bit safer he could go with Luiz. Bellerin has a late fitness test with a hamstring problem, so I expect Chambers to play on the right. In midfield Unai should play Torreira and Xhaka but he may not dare selecting the Swiss given ‘the situation’. If he does opt for another Torreira/Guendo combo in the DM-pivot, Arsenal will struggle once again. In attack Emery has plenty of options and I guess he will look to play a much more attacking game in front of the (critical and antsy) home crowd tonight and therefore put out most of his big guns (with Auba on the bench as his insurance policy).

The final big question is: will Emery be able to instruct and fire up his players to play with purpose and intensity and with a real desire to win tonight? We will see in just a few hours.