Dennis Nicolaas Maria Bergkamp – Born: May 10, 1969 Amsterdam, Netherlands was the fourth of four sons. He was brought up in a working-class suburb; his father who was an electrician played amateur footballer in the lower leagues. He was named in honour of Scottish striker Denis Law but in order to comply with Dutch given name customs, an extra “n” was inserted into his first name, by his father, after it was not accepted by the registrar.

He was spotted by Ajax and was brought up through their famous youth system, joining the club at age 11 and making his professional debut on 14 December 1986. He scored his first senior goal for the club against HFC Haarlem on 22 February 1987 in a match Ajax won 6–0. He went on to make 23 appearances in the 1986–87 season, including a European debut against Malmö FF in the 1986–87 European Cup Winners’ Cup, Ajax won the competition, beating Lokomotive Leipzig 1–0.

In later seasons he established himself as a first-team player for Ajax. This culminated in a period of success for the club that won the Eredivisie title in the 1989–90 season for the first time in five years. Dennis scored 29 goals in 36 games the following season and became the joint top goal scorer in the league. Ajax won the 1992 UEFA Cup Final, beating Torino through the away goals ruling. He was the top scorer in the Eredivisie from 1991 to 1993, and was voted Dutch Footballer of the Year in 1992 and 1993. In total, he scored 122 goals in 239 games for his hometown club.

Dennis attracted the attention of several European clubs as a result of his performances for Ajax. He was insistent on playing in Italy. as he considered Serie A “the biggest league at the time” and preferred a move to either Juventus or Internazionale; on 16 February 1993, he agreed a £7.1 million move to Internazionale and made his debut against Reggiana on 29 August 1993.

In his first two seasons at Internazionale, the club changed managers twice and Dennis had a difficult time, troubled with stress injuries and fatigue from the 1994 World Cup, he only scored five goals in 26 appearances. Off the field, his relationship with the Italian press and fans became uncomfortable. His shy persona and his propensity to go home after matches were interpreted as apathy. Because of his poor performance on the pitch, one Italian publication renamed their award given to the worst performance of the week, L’asino della settimana (Donkey of the Week) to Bergkamp della settimana.

Dennis left Internazionale and signed with Arsenal in June 1995 for a transfer fee estimated at £7.5 million. He became manager Bruce Rioch’s first signing at Arsenal and broke the club’s transfer fee record of £2.5 million. On the opening day of the 1995–96 league season, he made his full debut against Middlesbrough. He struggled to adapt to the English game and failed to score in the club’s next six league matches, prompting ridicule by the national press, he ended his first season with 33 appearances and a goal tally of 11.

The appointment of Arsène Wenger as Arsenal manager in September 1996 marked a turning point in his career. Wenger, who had moderate success coaching in France and Japan, recognised his talent and wanted to use him as a fulcrum of the team’s forward play. Both were advocates of a continental style of attacking football, and Dennis was happy with Arsene’s decision to impose a strict fitness and health regime. Despite making fewer appearances in the 1996–97 season, he was more influential in the first team, creating 13 assists.

The following season he was instrumental in helping Arsenal complete a domestic league and cup double. He became the club’s top scorer with 22 goals and recorded a strike rate of 0.57. In 1997/8 he was the recipient of the PFA Players’ Player of the Year award, becoming only the second foreign player to be recognised by his fellow professionals as the outstanding performer in English football.

After 3 seasons of finishing second more success finally came in the 2001–02 season. Arsenal regained the league, beating Manchester United at Old Trafford in the penultimate game of the season to complete the club’s second double under Wenger; Arsenal defeated Chelsea 2–0 to win the FA Cup four days prior. Dennis played in 33 league matches, setting up 15 goals. After a 3 game red card suspension he made his return against Newcastle United on 3 March 2002. Early in the match, Arsenal midfielder Robert Pirès played a low pass from the left flank to Dennis in the edge of the opponent area with his back to goal. Under pressure from his marker Nikos Dabizas, he controlled the ball with one flick and went around the other side before placing the ball precisely into the bottom right-hand corner to score. Arsene described the goal as “unbelievable”, adding “It was not only a magnificent goal but a very important one – I enjoyed it a lot”

Dennis reached a personal landmark during the 2002–03 season, scoring his 100th goal for Arsenal against Oxford United in a FA Cup third-round tie. On 20 July 2003, he signed a one-year extension at the club. The 2003–04 season ended on a high point as Arsenal reclaimed the league title, becoming the first English team in more than a century to go through the entire domestic league season unbeaten Champions League over two legs. He committed himself to Arsenal at the end of the season, signing a further extension to his contract.

The team finished fourth in the league in his final season at Arsenal. After much campaigning from Arsenal supporters, the club designated one of its Highbury match day themes, organised to commemorate the stadium’s final season as home of Arsenal, to Dennis Bergkamp. “Bergkamp Day” took place on 15 April 2006 It celebrated his contribution to Arsenal; fans were given commemorative orange ‘DB10’ T-shirts – the colour of his national team, his initials and his squad number. Dennis came on as a second-half substitute and set up the winning Pirès goal moments after Nigel Quashie had levelled the score. Fittingly, his 89th-minute goal proved to be his last for Arsenal in competitive football.

He was the focus of the first match at Arsenal’s new ground, the Emirates Stadium. On 22 July 2006, a testimonial was played in his honour at the new stadium as Arsenal played his old club Ajax.

Dennis made his international debut for the Netherlands national team against Italy on 26 September 1990. He was selected for Euro 1992, where his national team were the defending champions. Although he impressed, scoring three goals in the tournament, the team lost on penalties to eventual champions Denmark. In the qualification for the 1994 FIFA World Cup, hep scored five goals and was selected for the finals, staged in the United States. He featured in every game for the national team, getting goals against Morocco in the group stages and the Republic of Ireland in the round of 16.

Against Wales in the 1998 FIFA World Cup qualification on 9 November 1996, he scored his first hat-trick for the national team. The Netherlands finished first in their group and qualified for the 1998 FIFA World Cup, held in France. Dennis scored three times in the competition, including a memorable winning goal in the final minute of the quarterfinal against Argentina. He took one touch to control a long 60-yard aerial pass from Frank de Boer, brought the ball down through Argentine defender Roberto Ayala’s legs, and finally finished by firing a volley with the outside of his right foot, past the keeper at a tight angle from the right, he described the goal as his personal favourite in his career. His international career ended with 37 goals in 77 appearances.

In April of 2007, he was inducted into the English Football Hall of Fame by viewers of BBC’s Football Focus. A year later, he was voted second by Arsenal fans behind Thierry Henry in a list of the 50 Gunners Greatest Players.

This is a summary of his achievements.

His statue now stands outside Emirates Stadium honouring him as one of Arsenal’s legends. 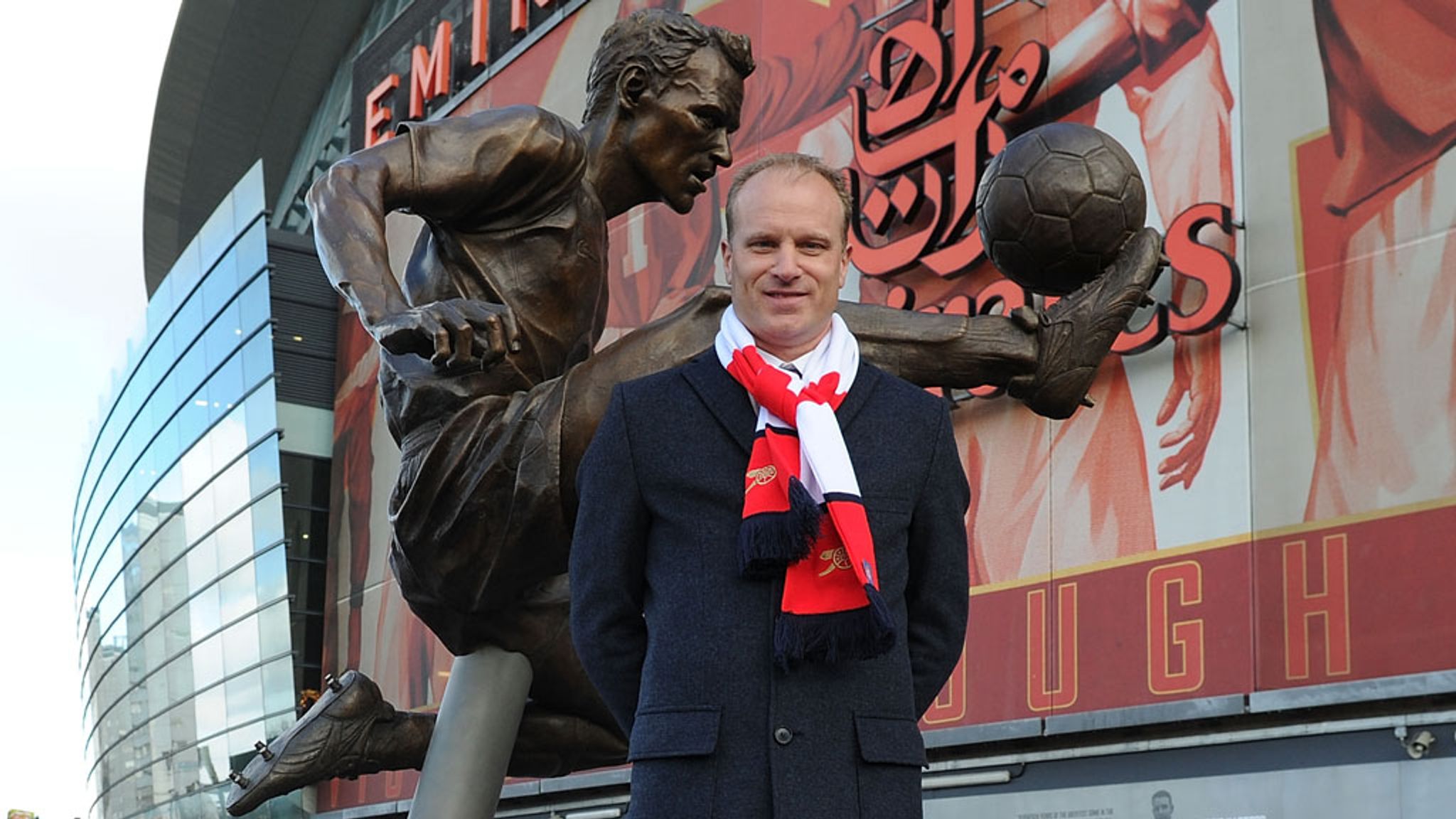 Dennis scored his 100th goal in an away FA Cup game against Oxford United on January 4th, 2003.

48 thoughts on “Arsenal Best Attackers Ever: Nr16 – He Let The Ball Do the Flying”