Robin van Persie was born in Rotterdam, Netherlands. The son of two artists, he was encouraged to follow in his parents’ footsteps, but he preferred football.

He joined Dutch side SBV Excelsior’s youth squad at the age of 14 years, but left at the age of 15 and signed for Feyenoord. He was quickly promoted into the first team due to injury problems among the squad, and made his debut for the club at 17, which was the first of 15 total starts. He received the KNVB Best Young Talent award at the end of the 2001–02 season and then signed a professional three-and-a-half-year contract the following season. Clashes with his manager Bert van Marwijk saw him demoted to the reserve squad, he finished his tumultuous debut season on the first team, making a total of 28 appearances and scoring eight goals, in addition to finishing runner-up in the KNVB Cup. Feyenoord unsuccessfully attempted to extend his contract during the off-season. His deteriorating relationship with van Marwijk led to his spending most of the 2003–04 season on the bench. He again played 28 matches, but finished with two fewer goals than the previous season. 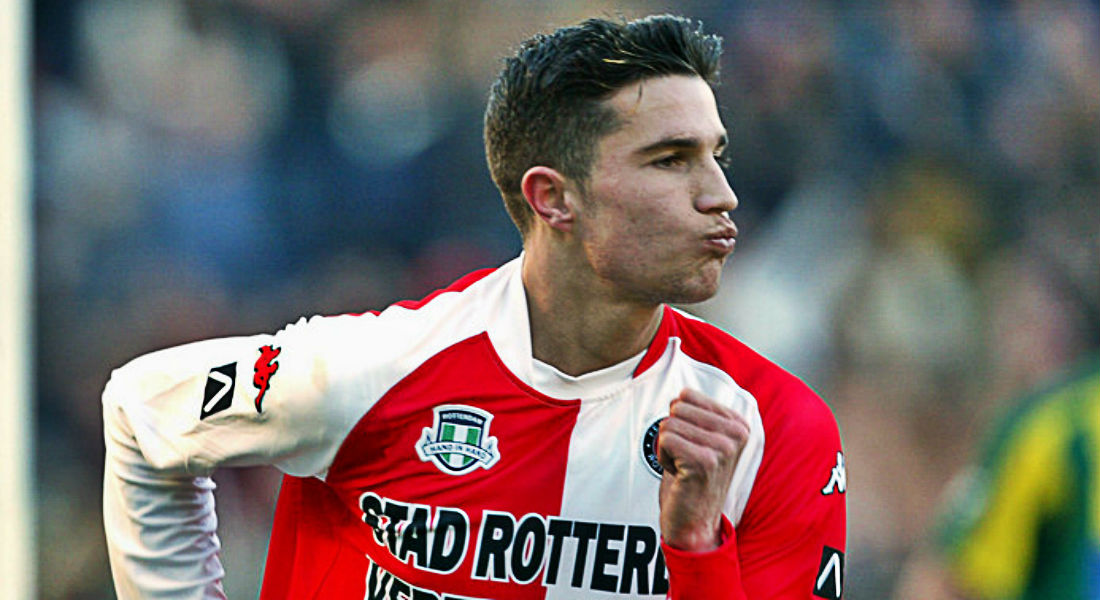 On 17 May 2004, Robin signed a four-year deal with Arsenal for £2.75 million, just over half of Feyenoord’s original asking price of £5 million. Arsenal manager Arsène Wenger, who planned to convert him from a left winger to a centre forward, said of his new acquisition, “He can play on the left side of midfield, as a creative player behind the main strikers or as a target man. Robin spent most of his time on the bench during earlier parts of the 2004–05 season, and made his competitive debut on 27 October by scoring Arsenal’s opening goal in a 2–1 League Cup win over Manchester City. He was sent off for the first time, in an Arsenal shirt, on 26 February against Southampton, following a lunge at left back Graeme Le Saux, for which Wenger was seen yelling an obscenity at him from the sidelines. He then later lambasted him in the press stating “I do not support Van Persie today” Telegraph sportswriter Clive White described Van Persie in his match report as “21 going on nine.” He was consequently benched for a number of games, starting with Arsenal’s FA Cup replay against Sheffield United, and he was reintroduced into the squad only after Henry was out with a calf injury, his return to the first team saw him score twice in a FA Cup semi-final win over Blackburn Rovers. The rest of his season was cut short by injury, and he finished with ten goals in 41 appearances in all competitions.

Robin’s good form at the start of the 2005–06 season earned him the Player of the Month award for November 2005 after eight goals in eight starts, and he was rewarded with a five-year contract extension until 2011. Two days after signing the contract, however, he was once again hit by injury when an opponent stepped on his foot and broke his toe during an FA Cup match.

The beginning of the 2006–07 season included an airborne volley against Charlton Athletic that Arsene called “the goal of a lifetime” and he was later named BBC Sport’s Goal of the Month for September, and he capped off the calendar year by being named the 2006 Rotterdam Sportsman of the Year. His season, however, ended early for the second time in his career on 21 January, when he fractured the fifth metatarsal in his right foot. After the departure of Thierry Henry he assumed the role as Arsenal’s main striker. Following a streak of seven goals in ten regular-season games, he was sidelined for two months with a knee injury suffered on international duty. He made his comeback in Arsenal’s Champions League group stage on 12 December and made his Premier League return in the win against Chelsea over the weekend. However, he picked up a recurrent injury that kept him sidelined until January when he played 45 minutes in a League Cup game against Tottenham Hotspur. He was withdrawn at half-time following another injury scare and featured sporadically throughout the rest of the campaign. The following season (2008–09) he was named as the Arsenal.com Player of the Season. With only one year remaining of his contract, it was announced in July that he had signed a new long-term contract with his club, stating, “My heart is with Arsenal and I just can’t picture myself in a different shirt.”

On 14 November 2009, he injured his ankle in an international friendly and was initially expected to be out for six weeks, but further tests showed that he would be out for five months. Before the start of the 2010–11 season, his squad number was changed to number 10. He made his 200th appearance in August but an ankle injury suffered in the game placed him on the sidelines once again. He returned as a substitute for Arsenal’s

0–1 defeat to Newcastle United on 7 November. On 1 January 2011, he scored his first goal of the season in a 3–0 away win over Birmingham City. On 15 January, he added two more goals to his tally in a comfortable 3–0 win over West Ham. This made him only the fourth Dutchman to reach 50 goals in England’s top division. Robin scored his first career hat-trick in a 3–0 win over Wigan Athletic on 22 January and two goals against Newcastle United in a 4–4 draw on 5 February. Continuing his fine form, he hit a brace the following week against Wolverhampton Wanderers scoring both Arsenal goals in a 2–0 win including a volley from inside the box. The ten goals he scored between 1 January and 12 February set a new Premier League record for most goals scored in the first two months of a calendar year.

He set the Emirates alight with a goal from an almost impossible angle in Arsenal’s fight back against Barcelona in the UEFA Champions League Round of 16 which ended 2–1 in favour of the Gunners. On 27 February 2011, Van Persie captained Arsenal at Wembley Stadium in the League Cup final, scoring the first half equalizer for the Gunners. It was his first goal at Wembley and his first in a cup final for Arsenal. However, he was later taken off in the second half with a knee injury he picked up while scoring the goal. He was voted as the second best player of the 2010–11 season on Arsenal’s official website and also received the team’s Goal of the Season award for his audacious strike in the 2–1 victory over Barcelona in the Champions League.

Having been appointed vice-captain for the 2010–11 season, he was promoted to club captain at the start of the 2011–12 season. He finished the season as the top goal-scorer in the Premier League with 30 goals, and became Arsenal’s 8th all-time top scorer with 132 goals.

On 4 July 2012, he announced that he would not be signing a new contract with Arsenal.

Finally after a series of rumours he was transferred to Manchester United for a reported £22.5 million. Supporters of Manchester United voted Van Persie as the Sir Matt Busby Player of the Year for the 2012–13 season.

32 thoughts on “Arsenal Best Attacker Ever: Nr13 – We Loathe Him So Much Because We Loved Him So Much”