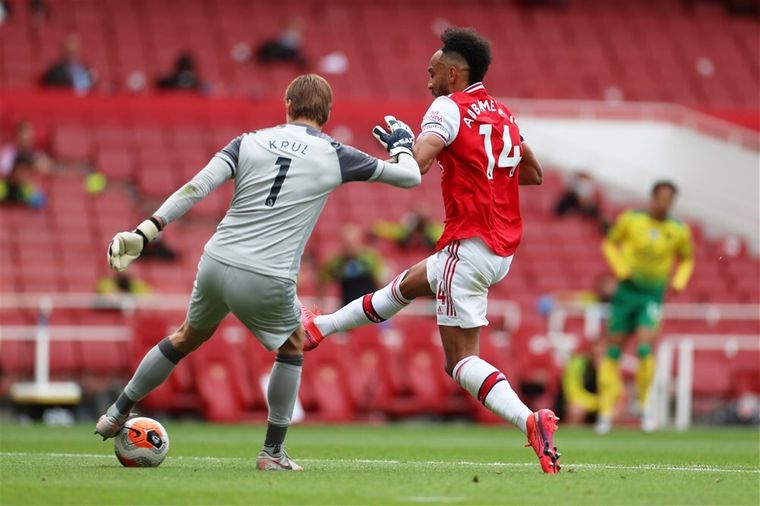 Norwich had impressed against the Red Mancs at the weekend, but other than 15 minutes in the second half, after a tactical adjustment by the manager at half time, they offered little opposition to Arteta’s well-drilled and motivated boys.

Mikel seems to have moved to a 3-4-3 formation with Xhaka and Ceballos/Willock in the centre of midfield and two wing-backs in quite forward-orientated positions. The latter positions were taken by the tenacious Tierney and the willing but somehow not very confident/effective Bellerin, and they were able to really stretch the Norwich defence by staying wide and making constant runs behind them.

But the big star, at least in the first half, was Ceballos. The Zidane (seasonal?) cast-off played with energy and panache and he sliced the Canaries’ defence open at will. That goal in Sheffield clearly has given him wings and today he played with them for the best part of an hour. It was a Fabregas-esque performance, a joy to watch.

The defence did not have too much to do other than between the 45-60th minutes; our attack was lively rather than efficient it forced the Canaries into a number of mistakes for which they paid the ultimate price.

Martinez: 8 – made a very important low to the ground save at the start of the second half and just oozed confidence and presence for 90 minutes. This is his moment.

Mustafi: 6 – the game was too easy for him in the first half and as a result he lost his concentration towards the end. Probably subbed because of injury (Arteta is a Y-Manager and does not substitute players at half time to ‘teach them a lesson’).

Luiz: 7 – similar to Mustafi dropped in concentration levels towards the end of the first half. Still, Davide is a leader on the pitch with presence and positivity.

Kolasinac: 6 – looks out of place in the left-CB position but he put in a shift.

Tierney: 7.5 – great wing-back play throughout the game and quickly becoming one of Arteta’s automatic picks. Combines tenacity and fight with calm and high-quality crosses. Fecking love him.

Xhaka: 8 – take him out of the team and we are missing our foundation/ our conductor. There are still people who want Xhaka gone/ don’t believe he is ‘Arsenal’ quality… Ah well… Took his goal very well.

Ceballos: 8.5 MOTM – see also above for my praise for him. Dani danced us to victory today.

Bellerin: 6 – tried hard but the final ball is too slow and lacks conviction. Something is missing and I wonder whether Bellerin’s time may be up….

Nelson: 6.5 – tried to add attacking intent where and when possible. A skillful and intelligent player who needs a number of games to play himself into the team.

Willock: 7 – Norwich overpowered the midfield at the start of the second half and Arteta had to bring Joe on to readdress the balance; and the boy of only 20 Springs did very well. Willock added presence and helped us push Norwich back towards their goal with his smart runs and passes.

Laca: 7 – a seven for effort and impact on our overall attacking play. He gets himself in good scoring positions too but really has to focus harder on converting the more than decent chances that come his way in every game.

Auba: 8.5 – MOTM – two goals – ‘one of them and Eddie’ – and an assist, but there is much more to his game: hard work, making other player more effective and help out in defence, to name a few.

Eddie/ Pepe: – not seen enough of them to give a score.