After having had some great momentum towards the end of last season, it was important to not get embarrassed by Pool in this game for which they were the obvious favourites. In contrast, the Champions really needed a pick-us-up game as to get back in that winning mood and regain some energy.

Klopp’s Liverpool is all about suffocating the opponents in their own half, pass them dizzy and then dance the ball into the net. They bully opponents and are fully focused on not letting you out of their iron grip. But Arteta has found the antidote to these tactics and had his team fully prepared and instructed to get through Klopp’s Berlin wall, and then do some damage to them. In the first half we played almost faultless, our only weakness being our right flank where we gave away too much space for which we could/should have been punished: Robertson produced from there a number of peaches of crosses but with good defending, wasteful attackers and a bit of luck no goals came from them.

Funnily enough, our best attacking moves also came from our right flank, and so we should say that getting the balance right there remains a work in progress. Our first goal was a beautiful, well-rehearsed team effort: it started with Martinez playing it out to our right flank: Bellerin played in Saka and then Bukayo switched it with his left foot sumptuously to the left where Auba was waiting… Tierney and AMN made runs into the box, thus distracting the Pool defenders and allowing PEA to free up his right foot and then to place-shoot the ball from outside the box high into the right corner. 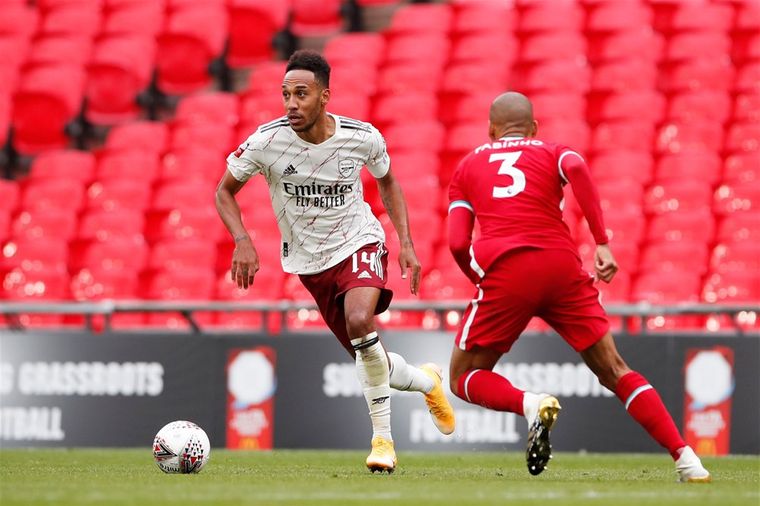 Pool tried to increase the tempo and hem us into our own half even more, but we kept controlling the ball well and finding a way out of the red maze regularly. Bukayo played at times Ozil-esque football: he has that ability to create a bit of time and space for himself and then he makes such mature decisions. There is so much feeling in his foot as well and he just found fellow players in tight space with relative ease. The hard working Eddie probably should have scored from one of those passes, but we forgive him.

In the second part of the second half we started to sit back too much, no longer able to release pressure by playing out the ball from the back. Legs and heads were tired and Arteta did not have much experience on the bench (Laca, Willian, Torreira, Pepe etc were all left at home for various reasons). They deservedly equalised but we were the stronger team again during the last ten minutes and Joe had a good chance to get us back in the lead again. Alas, it was not to be but then we scored all our five pens and earned the right to kiss and then lift the Community Shield for the 16th time in our history.

Martinez – Happinez: 9 – assured, large as a brown bear with eight legs and arms, some vital stops.

Tierney – Mini-Tornado: 9 – so at home at Arsenal. Such focus and presence and some peaches of crosses too.

Luiz – Leader of the Pack: 9 – Imagine being a Chav and watching their former CB play like that twice this month? Hahahaha

Holding – Man(e)ater: 8.5 – All pressure came from Pool’s left side but he handled it well time and again. Had Mane in his pockets for most of the game.

Bellerin – Nutmegger: 8 – Some great attacking contributions and defensive interventions but allowed too much space in front and next to Holding in the first half, which could have cost us (see also Saka).

AMN – Mobile WALL: 8 – Together with Tierney and Auba he bossed our left wing. Apparently some very good Egyptian attacker played there for the opponent, but he must have been in AMN’s and Tierney’s constant shadow, because I did not see him! Final attacking ball is still in need for improvement but that will come. Please keep him, Mikel.

Xhaka-Elneny: 9.5 – Men of the Match – the Alcatraz in midfield: The least sexy players on the pitch (together with Holding) but they denied the Pool midfield to ever get into their game, which is key in winning a game against them. Kept it simple but their positioning when defending and their passing out from the back was simply awesome. Just watching them play such disciplined football was a joy for me.

Nketiah: 8 – the (almost) golden nuisance – Excellent in the ‘Laca-role’: never gave Van Dijk any time to control the game from the back and was always a danger when  we were attacking. Probably should have scored but Allison denied him with a first class stop low to the ground.

Saka: 8.5 – our ‘new’ Ozil – half a point deduction for leaving too much space in front of and next to Holding in the first half, which could have cost us (see also Bellerin), but he produced some first class key passes and crosses and was vital in us releasing the presure Pool liked to put us under.

Cedric: 7 – struggled to get into the game and looked lost at times, but good effort and peach of a cross for Willock to make it 2-1 to the good guys, but it was not to be.

Other subs: Joe, Kola and Reiss. No scores as not long enough on the pitch.