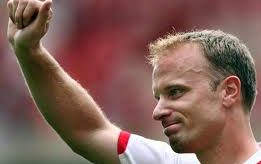 What a brilliant week for Arsenal! The much desired win against MU at the stadium of screams – dives need sound-effects after all – kicked it all off. The boys were still a little nervous, especially in attack, but as soon as the coolest cowboy in town – of all Gunners! – put the ball past his fellow countryman, they knew they could do it. Nacho, I will never forget that goal: you, senor, have balls! And how sweet was it to see Danny the Gunner put the winner past his old team mates in front of 65000 Mancs and 9000 away-Gooners? Making it to the last four of the FA cup and finally overcoming the non-oil funded Mancs was just brilliant.

And then came Wednesday, when the self-adoring one saw his bridge-babies go out to PSG, despite having the ref in their pocket, playing 60 minutes (excluding extra time) with 11 against 10, and going in the overall lead eight minutes before the end! The much overrated Chavs saw their dark tactics turn on them and they did not just lose their chance to progress in the CL, but also damaged further their brittle reputation. Maureen will almost certainly win the PL this year; but with all those draws against fellow competitors, inability to progress in the CL and a reputation of diving and general bad sportsmanship, his paymaster might soon be wielding the axe again. Wouldn’t that be nice?!

And then, to take all three points from the Champions, came Boyd’s daisy-cutter for Burnley. Arsenal had already put the Hammers to bed with a 3-0 thumping and had come within a point of second spot. A calm and disciplined performance saw us once again produce double figures of shots on target, eventually leading to three of the finest goals of Wengerball quality. The perfect preparation for a little encounter on Tuesday…

Speaking of which, they were held today by the Saints and dropped a further two points. The gap is still too big, but they need to go to relegation threatened Hull next and big Brucer will fancy given Maureen a bit of a game, don’t you think?

Of course, it is OGAAT for us, and we have a never easy away game against the Barcodes on Saturday. But first we will aim the red and white hot cannon on the tax avoiders of the Cote d’Azur. With Ozil, Alexis, Giroud, Theo, Santi and Ramsey we will be able to field a team which has plenty of goals in them – Wenger will need to leave at least one of these fine attackers out of the starting eleven, as the likes of Welbeck and Rosicky might also still claim a starter spot. It won’t be easy against Monaco, but we can do it: let there be no doubt about it. We can even afford to concede a goal, as we need to score three anyway…. and if we manage to score three, we can also score a fourth.

Some say we should take a planned approach and aim to score a goal in each third of the game, but I reckon we need to play at an insane tempo with tremendous pressure on the Monaco defence: the way we took Milan on a few years ago, when we almost did the impossible. It is all about finding their weakest spot(s) and cracking them open like a ripe walnut: and once we are in we need to pounce again and again. With Alexis’s tenacity and pure quality, Ozil’s genius, Theo’s speed and ability to finish cold-bloodedly, Giroud’s all-round ability, Santi’s wizardry and Ramsey’s engine and finishing ability, we have the weapons to take revenge. On top of that, our confidence is high and we now know how to win tough games.

Arsenal had a great week, but reaching the final eight of the CL would surely top it all. You are taking the urine I hear you say: a glass half full of it, is my response.

Come on you Rip Roaring Gunners – Time to load the Cannon once more! 🙂

20 thoughts on “Theatre of Screams, Maureen gets humiliated, Arsenal almost second and progress in FA Cup: What a Week!”