Having now watched our games against LC for a second time, I can conclude that my initial views were pretty much on the mark  (see previous post). We did not struggle to break them down but lacked a bit of composure and quality to make it count for large parts of the game. Despite the Foxes’ military position taking, we managed to get behind and through them on many occasions and that will bode well for the future. It is fair to say we need to become more clinical up front and I am sure we will once Alexis and Theo have found their shooting boots again. The problem is not that we don’t have a beast of a CF but two months without the Chilean firecracker and a serious lack of form by Teflon Theo have been a challenge for us in the goal department. Hopefully this will change now.

It is not easy to play a team that sits back so deep, works hard to deny you every bit of space, loves to foul and is deadly on the counter. Ranieri is an Italian who knows how to make his team defend, and you can see why Wenger thinks that Mourinho’s successful first stint at the Chavs was largely built on the foundations laid by the current Foxes’ manager. There was much to admire about Leicester on Sunday: the way they worked as a solid team, had a clear plan (including some Machiavellian elements of stealthily kicking our creative players regularly) and broke lightning fast every time we lost the ball in midfield during the first half of the game. There was not a single weakness in their team and we had to work very, very hard to undo them.

The referee spoiled this game by letting the Foxes make too many fouls and disrupting our flow in the process among other malpractice. I have nothing against defensive strategies but it is up to the referee to make sure that regular fouling of key players does not go unpunished: it takes a good one to find a perfect balance and Atkinson was very poor at this, especially in the first half. The fact that he blew the whistle almost every time an Arsenal player got physical with a LC player was the most infuriating of it all.
And then there was the moment that saw Vardy, the fox of Foxes (doesn’t he look like a wily, dirty fox?), climb into Nacho to force a penalty on us through the easily seduced Atkinson. Football is a sport in which clubs pay their key players enough to buy a house every week and yet we are relying on the whim and subjectivity of the referee and a couple of linesmen to decide the outcome of key moments, and with that often games and even competitions and tournaments.

Danny Simpson’s sending off was a big turning point in the match, of course. Should he have been sent off? He should have had a yellow card earlier in the game for an assault on Alexis, but his first yellow was harsh nevertheless, and it all felt like the gullible referee was making up for his mistakes in the first half. The second one he did deserve, though, and was down to his own stupidity: when regular fouling becomes a mentality it is hard to switch off, even when on a last warning.

Defending with ten men is not the end of the world, especially if you are in front, and LC just stuck to BAU (business as usual) by making a few changes to replace the tired or sent off warriors with like for likes and leaving Vardy alone up-front (where he remained a menace till the end). 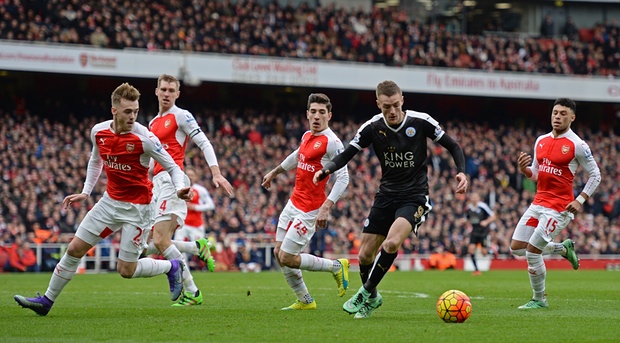 We had about forty minutes to cracks this skulk of Foxes and we needed something different. Off went the slowly getting up to speed Coquelin and on came Theo on the right, with the, once again hot and cold, Ox moving deeper. He made a difference straightaway with his fresh legs and extravert desire and the whole team benefited from it. We became more dangerous and started to get closer to scoring; moreover, the tempo increased and the foxes started to show signs of fatigue and confusion. And finally we got our well-deserved equaliser: a fine cross by Bellerin is pin-cushioned into the path of our own fox in the box, Theo, who stayed cool when Schmeichel junior jumps wildly towards him.

After that we smelled the Foxes’ blood, but bad finishing by the likes of Alexis and Rambo and heroic defending just kept us from the all-important second goal. Giroud hammered one towards goal from close range, but just a bit too high, and the keeper was able to get a strong hand to it. Mesut landed one beauty of a cross on the BFG’s head but his improvised header went the wrong side of the post. Despite all the effort we were not going to score, but then we were given the very last gift through a silly foul by the one who had replaced the earlier sent off player who had been silly as well…very un-fox like. 🙂

Up steps Mesut and his free-kick is so good that three Gunners could have scored from it, had Danny not cushioned it in with his fine, well-trimmed carpet of hair straightaway.

It was like the final few tunes of the Bolero and the orgasmic sight of the players running in triangle shape towards the fans will stay with us for a long time.
By TotalArsenal.

With thanks to the Guardian for pictures above.

19 thoughts on “All is Well that Ends Welbeck: Reliving a Bad Film that Ends Like the Bolero”