I don’t know much about Chivas and it is hard to predict whether this will be a proper game or more of a stroll in the park. It takes two to tango but I have no doubt that our boys will be up for it.

How will we line up for this one?

Cech in goal and a CB pairing of Holding and Chambers is my guess. The full backs could be the same as on Thursday, but I reckon Bellerin and Nacho will start as they need the game practice.

In midfield I expect to see Santi get a start, possibly coupled with Xhaka and Jack playing in the hole. 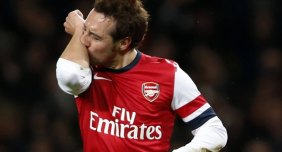 Up front I expect to see Akpom start with Gnabry and Iwobi on the ‘midwing’ positions. Chuka deserves a chance to start after his goal and Gnabry and Iwobi are closest to first team level football, and I want them to work with Akpom to form a lethal attack.

Your guess is as good as mine, but let’s see who will start and how they will do.

The game will be on Arsenal.com from 2am.